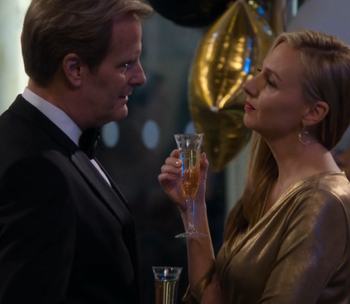 In a recent episode of The Newsroom—Aaron Sorkin's HBO series, which has been criticized for portraying women in a bad light—there was a gossip columnist played by Hope Davis. Jeff Daniels's character flirts with her but gets upset when he finds out she's working on a "takedown piece"—you can catch up in the clip below. Unsurprisingly, the gossip columnist was based on a real person... sort of. Today on xoJane.com, Mandy Stadtmiller—a recovering celebrity gossip trafficker for the NY Post—revealed that the character was an evil version of herself.

Stadtmiller met Sorkin in 2010, and paints him in a pretty good light (this isn't a takedown piece), while including screenshots of emails from him showing how her Newsroom character was taking shape (if you have a problem with this sort of sharing, fast forward to her closing remarks: "if someone uses me in his writing, doesn't it seem fair that I use him in my own?") One reads:

"I want to remind you about a conversation we had at dinner in New York. I asked you what you were working on and you told me about the take down piece and I got preachy and condescending (so unusual for me) and instead of being insulted, defensive or telling me to go fuck myself, you said that you understood completely but that it was your job. I told you then that while you were talking I had an idea. What if the same thing were to happen to Jeff Daniels—he's on a date with a Post reporter who tells him he's doing a take down piece, Will tells her what he thinks of that but instead of acting the way you did, she goes off in a huff and starts taking him down with little items in the Post. I'm about to start writing that episode right now and I'm telling you now as I told you then, THIS CHARACTER IS NOT YOU. In fact, in the writer's room, when talking about this story, we call the character 'Bad Mandy' (as opposed to real Mandy) because I haven't named her yet. I thought it was worth re-emphasizing that."

The entire piece is worth reading—and after reading it, we'll even give Sorkin a pass (just this once) on using Coldplay's song "Fix You."