Inside the Oakland space, Ghost Ship. (via Oakland Ghost Ship/Tumblr)

In the wake of the tragic fire that swept through an illegal warehouse party in Oakland over the weekend, we reached out to NYC promoter Todd Patrick (a.k.a. Todd P), who has run a number of successful DIY venues and events, both legal and illegal, over the years. Patrick is well-versed in the struggles of trying to run a smaller event space in New York City, and he believes there needs to be "a fundamental reassessment of the building code and a fundamental reassessment of how we provide safety to spaces."

Patrick—who made "a conscious decision years ago to back out of doing anything in unlicensed and unsanctioned spaces"—says the rules are "so byzantine and complicated that nobody can do it... I have tried and tried and tried to open, following all the rules and doing everything the right way, but the cards are definitely stacked against you." He has spent the last six years presiding over a shuttered Market Hotel, which had previously been an unlicensed space, slowly working to reopen it with fire sprinklers, a fire alarm, proper staircases, emergency lighting, and all necessary licenses and sanctions.

This obstacle-jumping drives what is already a more underground scene even further into the shadows, where safety lapses are more likely. Patrick believes those who run DIY venues or organize events in illegal spaces aren't given much of a choice, though it should be noted that they can still try to make their venues as safe as possible. "It seems like [the fire in Oakland] was made worse by the decisions of the folks who ran the space made in terms of how they constructed it," Patrick said. 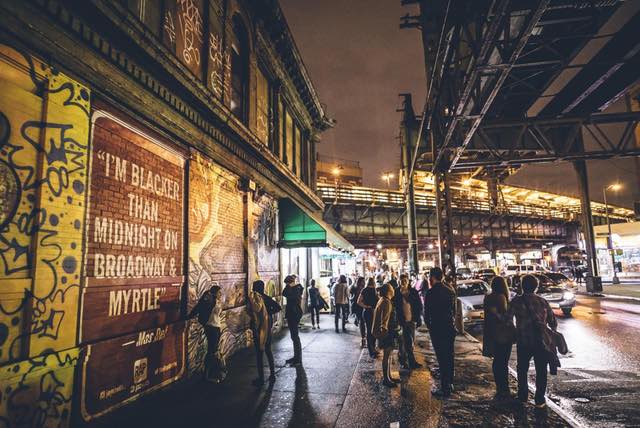 Market Hotel, after reopening in 2015. (Photo by Ryan Muir)

The problem? Some events that aren't commercially successful are still going to be held, but they aren't going to be under the roof of an establishment run by a company like LiveNation. These kinds of events are relegated to spaces like the Oakland warehouse. "I wish we lived in some post-capitalist utopia, but we don’t," Patrick says, adding that "if we want to have different levels and different offerings of culture and places to be, all that costs money."

"It's very expensive, much, much, much more expensive than people think in order to do all of the compliance that is needed to get a place legally sanctioned," Patrick told us. "So we've created sort of a black market culture on culture itself, in terms of presenting anything that isn't going to make a ton of money. When you have a situation where it becomes basically financially impossible for most people to have any sort of agency in their culture, you’re gonna have worst offenders. Everyone’s gonna be breaking the rules a little bit."

One of the most deadly fires in the U.S. was at a completely legal venue—Patrick recalls, "the Great White fire in Providence, in the early 2000s, happened while the Fire Department was in the building, at a legal space that had just passed all of its inspections with flying colors." The issue, according to Patrick, is that "the rules are probably more complicated and cumbersome than it's for anyone's good. And that’s a shame because obviously we all would like to see every building have a sprinkler system, and every building have a fire alarm system."

We have reached out to the Dept. of Buildings and the FDNY for more on the codes and rules, and what they are doing, and will update if we hear back. In the meantime, Patrick says "there’s a combination of factors that could be changed in this country in terms of how difficult and byzantine we make the process." Adding that none of this "excuses the mistakes that were made in this particular situation" at the Ghost Ship, he points to another causative factor: affordability.

In a city like Oakland or New York City, where rent is the biggest expense for running any business, the problem is that the system for a "legal" place is super expensive to comply with. It also is absurdly time consuming. So you’re looking at a situation where to open a space, with all of the licenses, permits, and safety accoutrements, it would take a year and a half to two years for someone really experienced to just get through the process, much less pay for it. So while you’re waiting a year and a half to two years, you’re paying your rent. And they have a terrible crisis of rents going up much faster than inflation in this country both for business and for residential uses. How in the heck can anybody do that, unless they’re aiming to present only the most guaranteed commercially viable culture and art?

Patrick believes that "if the building code were less absurdly complicated and specific, [and] if we were really concerned about safety instead of being concerned about making it difficult, we would have a lot more people building safer spaces. And there would be a lot fewer people getting hurt." Though he's quick to also point out that there haven't been that many incidents like the one we saw in Oakland—"For all these people, [over] all these decades, who have been going to these tiny spaces... there have been a surprisingly few number of tragedies."

The city does have a Small Business Administration program aimed towards making it easier for those who want to open and run a business by the books, but Patrick says while it is well-intentioned, "most people in the nightclub industry don’t use [that resource], and because it’s unused by that industry, it’s also sort of atrophied in its expertise level in its ability to help."

We also contacted Seva Granik, another impresario known for his warehouse raves, but his only response came in the form of a link to this previous Gothamist post, about a bomb-threat themed party he threw two years ago.

#DIY venues
#oakland
#todd p
#todd patrick
#original
Do you know the scoop? Comment below or Send us a Tip