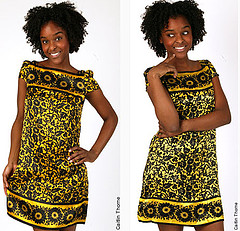 The Village Voice is questioning the merits of some top designers suing Forever 21 for "ripping off" their style. Over 20 designers in all are calling the store out for their fashion faux-pas, and they're led by Diane Von Furstenberg, president of the Council of Fashion Designers of America, who has brought the case to Washington "attempting to get federal legislation passed that would make clothes-copying clothes a criminal offence." This isn't the first time she's taken issue with the store, and now she claims they have knocked off her famous wrap dress and more than one of her prints, one of which the Voice adds "actually looks a lot like an old Marimekko design."

Seems the designers don't have leg, or 3-inch heel, to stand on -- or do they? Pictured are a Forever 21 dress and a Diane Von Furstenberg dress, guess which is which! That's some pretty solid evidence, and the lawsuit also has some big names in the industry behind it.

Anna Sui, who based an entire career on resuscitating, revamping, and rethinking the vintage fashions of the 1960s and '70s, the decades when she was young, is also livid about Forever 21 ripping off her designs, and she's suing as well. So incensed is she that for her spring '08 show (a collection that style.com described in part as "pure Barbara Hulanicki," citing the designer of the iconic 1970s label Biba), Sui stuffed each gift bag with a T-shirt depicting the owners of Forever 21 on a Wild West–style poster with the legends "Forever Wanted" and "Thou Shalt Not Steal."

Even Anthropologie (who surely rips off styles all the time) is in on the lawsuit! Everyone involved should be taking a good look at the history of fashion, however. Inspiration and influences are admittedly incorporated into designers own lines all the time. The Voice also points out that "lots of designers spend Sundays at the flea market. (They are, in fact, notorious for sweeping through the Manhattan Vintage Clothing Show.)" Head there yourself later this month before the designers snag the rags, put their name on them and mark up the price!