For Two Days, NYC Emerging Artists Will Get 'Up At Noon' With Live Performances In The Bronx

Jeff Stark has been on the forefront of NYC's DIY nightlife and performance scene for many years now, having spearheaded some of the city's most creative underground projects and headed up the indispensable events newsletter Nonsense NYC. But DIY culture has had a rough time over the last few years, with venues shuttering thanks to zoning issues, gentrification, and raids. Though there are still plenty of cultural spaces on the up-and-up, those tend to cater to more established acts to bring in more cash, leaving emerging artists without rooms of their own. To call attention to this phenomenon, this week Stark is inviting nightlife artists to perform outside a Bronx subway station in midday.

The project, dubbed "Up At Noon," will take place outside the Hunts Point 6 train station in the Bronx at noon this Wednesday and Friday. Each day will feature performances from artists, promoters and creative groups who've thus far gone under-recognized by the public. "The premise is, we're taking nightlife out of the night and putting it up at noon, for the express reason that DIY nightlife is kind of constantly getting pushed around in NYC and undervalued," Stark told Gothamist, pointing to popular DIY spaces like Death by Audio and Glasslands that have closed over the last few years. "People can't get places to perform or make culture. Everyone is always on the run," he said.

Stark pointed out that while the city does support arts and culture, "it's traditionally supported when associated with major institutions," like the Metropolitan Museum of Art, which has about 8 percent of its budget covered by the city. The result, Stark says, is that new and emerging artists get left out. "In fact, if there's only a nourishment of the major institutions, we stand the risk of becoming a city like Paris. Which is to say, a museum city, or a city that doesn't create new culture but exists as a venue for people to bring shows and things from other places and put them on at Lincoln Center," Stark says. 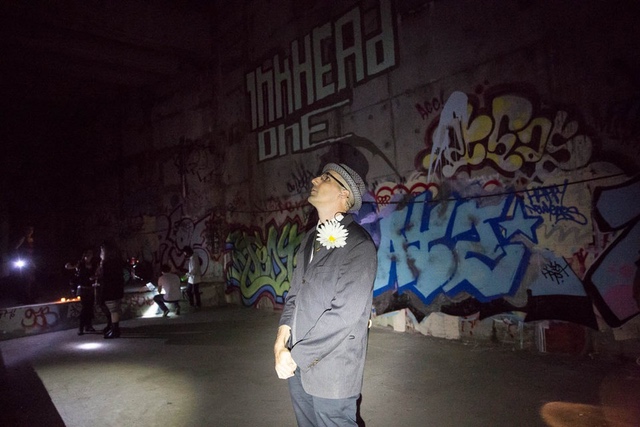 Jeff Stark at a secret party in an abandoned subway station in 2014. (Gothamist)

Stark is optimistic that there's still a future for DIY culture here—he noted that Tom Finkelpearl, who heads up the city's Department of Cultural Affairs, has at least made the effort to meet with DIY artists and groups to discuss the problems plaguing the scene and try to figure out a way forward. Still, he says DIY is struggling in New York. "There just aren't spaces for that kind of culture," he said. "We still have all of these city authorities who are constantly on the march for finding new places to shut down, and finding new violations. We end up with fewer and fewer venues, and it becomes harder for DIY artists to make culture and hone their craft."

"Up At Noon" is an effort to call attention to some of these artists by bringing them to a well-trafficked outdoor public space in the daytime. Stark teamed up with Casita Maria Center For Arts & Education, an 80-plus-year-old Bronx-based arts and culture organization, to bring four separate groups of performers to the Hunts Point Station. On Wednesday, the roster includes hardcore and hip hop performers With Slums + Caleb Gilles and Skarroneros, who are organized by presenter Yung Mayne; and drag show Chris of Hur. On Friday, attendees can expect Honduran garifuna music and dance, and a variety circus show courtesy of Bushwick venue House of Yes.

Stark hopes the project will help call attention to emerging artists' vital need for space in a city that's becoming increasingly hostile to DIY culture. And though he did acknowledge that artists often get blamed for the gentrification that tends to follow them, he noted that they too deserve a place here. "We keep losing venues, we keep losing spaces. These spaces are important and should be celebrated and supported," he said. "Artists and culture and DIY organizations are thrown around a lot in this unjust system. They're also often victims of this system."

#diy
#jeff stark
#the bronx
#up at noon
#original
Do you know the scoop? Comment below or Send us a Tip
A new Gothamist is coming! We’ve moved comments over to our beta site. Click here to join the conversation and get a preview of our new website.