Anyone whose younger self ever fantasized about tumbling down the rabbithole into Lewis Carroll's Wonderland will want to hop the L to Williamsburg, where an enthralling theatrical spell is being woven in an old Gothic church dating back to 1909. Like the Wonderland discovered by Alice, the world created by Third Rail Projects is as unsettling as it is enchanting. Performed for just 15 audience members at a time,Then She Fell explores Wonderland through the prism of Charles Dodgson's (a.k.a. Lewis Carroll) mysterious relationship with Alice Liddell, who was ten when she inspired the author's famous stories.

There's endless speculation about Dodgson and Liddell, fueled in no small part by this striking photograph that Dodgson took of Liddell when she was six. Then She Fell immerses the audience in Dodgson's alleged obsession with the girl, culling words from Dodgson's diary and what sound like love letters to Alice. (They are, I'm told, letters Dodgson wrote to others—the Liddell family destroyed all of his letters to Alice after forbidding the girl to see him.) Pages from Dodgson's diary from this time period are also ripped out, and as you learn in Then She Fell, Alice's mother Lorina Liddell—a doyenne of Oxford academia—proceeded to send her daughter away on a Grand Tour of Europe. 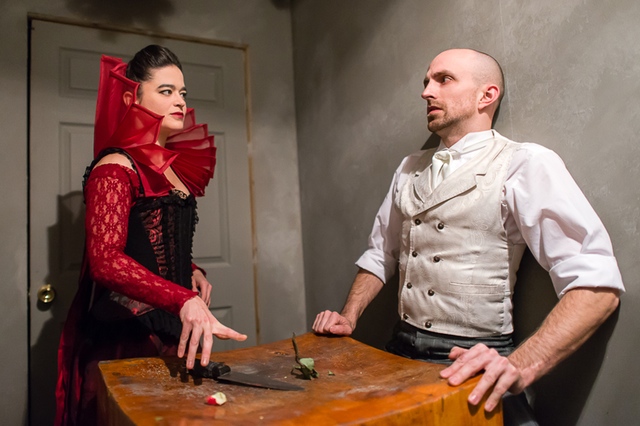 Over the course of two hours, spectators are submerged in a dance-theater fantasia that pokes around the edges of the controversial relationship. According to the imagined interior logic of the show, Dodgson appears to have inflicted psychological damage on the real-life Alice, who winds up The Kingsland Ward, a sort of psychedelic sanatorium where the show is set. Upon arrival, you're greeted by a nurse and instructed to take a seat in a back office space, where you and 15 fellow travelers are given a small "elixir" and asked to wait. (Except for the tea, all the concoctions you're offered during Then She Fell are mildly alcoholic.)

The "nurses" who instruct you where to go and what to do are no-nonsense, and the head nurse begins the proceedings by laying down some ground rules—you're not to open any door that's closed, and not to speak unless asked a direct question. But within each room of the Ward, you're free to pore over any documents and throw open any boxes or drawers (provided you close them again). To that end, each participant—in Wonderland you're very quickly transformed from a spectator to a participant—is given two keys with which to open a variety of locks. 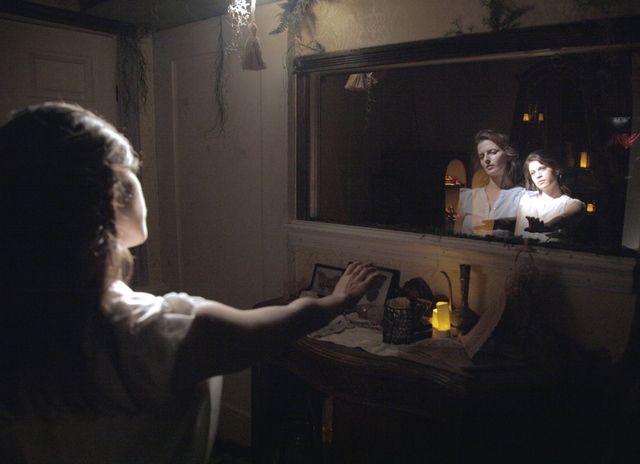 "We grant you full access to our facilities so you may draw your own conclusions," the stern head nurse explained, then told us we were about to embark on a study of liminality, which I later learned is "the quality of ambiguity or disorientation that occurs in the middle stage of rituals, when participants no longer hold their pre-ritual status but have not yet begun the transition to the status they will hold when the ritual is complete." She wasn't kidding. One by one, the nurses broke us off into smaller groups or individuals. I was taken into a room filled with old trunks, a writing desk, and a dozen or so different hats, and left alone to savor the thrill of snooping around in someone else's drawers, where old letters, photographs, and mementos spilled forth.

Then, from an adjacent room, I heard what could only be the Mad Hatter's febrile chatter, brought to vivid life in this performance by the captivating Elizabeth Carena. She burst into the room escorting another audience member (an older man who had already been fitted with a hat) and spouting cryptic aphorisms and poetic riddles. While searching for the right hat for me, she put the other man to work taking dictation for a letter to her creator, Lewis Carroll. Among other unanswered questions, the letter demanded Dodgson explain why a raven is like a writing desk. And in place of a salutation, she remarked, "Too bad you never gave me a name." 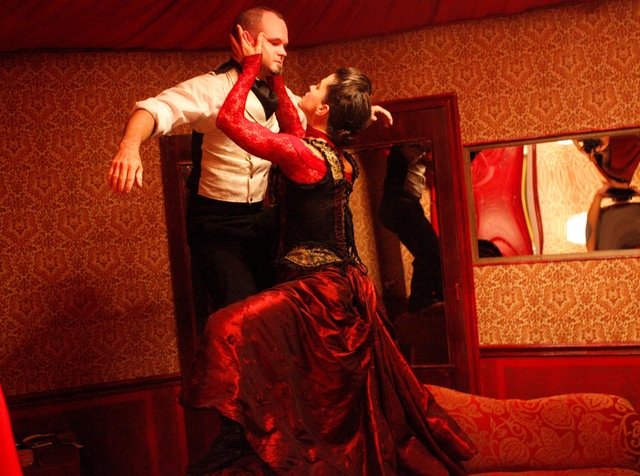 And then, whoosh, we were swept off into another room, where what at first appeared to be a large mirror in the middle of an expansive table turned out to be just an empty frame. The other man and I were instructed to sit down on opposite sides of the imaginary looking glass and left alone to ponder each other. For a while we sat there together, gazing at each other then looking away, unsure of the proper etiquette in such a situation. But the sensation of being in a waking dream began to take hold, and as strange ambient music ebbed and swelled throughout the room, I found myself transported.

Then a door behind me creaked open and two dark-haired young women appeared, standing side-by-side in matching dresses just like the two sisters in The Shining. But these aren't the Grady girls, they're Alice, and without saying a word they climbed onto the table on opposite sides of the imaginary looking glass and began to mirror each other in a slow, writhing dance. It was all faintly sensual and incredibly intimate, and though both performers were adults, I couldn't help but feel uncomfortable being drawn in by their beauty, as if some part of me was being nudged ineluctably into alignment with Dodgson's fixation on Alice, whatever it was. 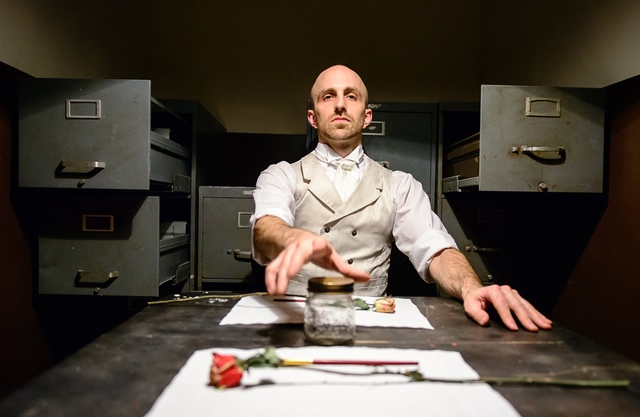 Then She Fell mines this duality to ravishing effect, presenting you with the Alice of Carroll's fantastic stories, and the real Alice, whose childhood was, in this telling, darkened and distorted by Dodgson. Of course, this duality of weirdness and wickedness is a dominant theme of the Wonderland books, and Third Rail's choice to make Dodgson's relationship with Liddell the subtext of this production adds a palpable layer of unease. Here the Red Queen (or is she Alice's mother Laura?) and the White Queen wield their own opposing influence, and the charismatic White Rabbit appears to be the Wonderland manifestation of Dodgson's repressed id.

In one particularly riveting scene, I found myself sitting alone in a tiny room with dead rose petals scattered on the floor and a small wooden chopping block with a very real knife on it. As I unlocked a box under the table containing this poem and other items, the White Rabbit burst in with the Red Queen hot on his heels, and the two fought and danced on the table, swinging the knife and grappling close enough for me to hear their breath.

I won't try to unpack all the strange surprises that unravelled during my inspection of Kingsland Ward, and I'm told that each audience member only experiences about 70 percent of what must be an incredibly complicated production. In fact, I've already given far too much away. It's best to tumble into this show as innocent as possible. But I will point out that the "participatory" aspect of Then She Fell is blessedly minimal—remember, NO TALKING—and the rule against opening closed doors is a key to the show's success. New York has seen a spate of interactive, walk-through productions in recent years (next to Then She Fell, the best was probably The Confidence Man), but all have shared a crucial flaw: the freedom to go wherever you want is accompanied by a feeling that there might be something more interesting you're missing, just around the corner.

By taking away that freedom and carefully curating the experience of a tiny group of participants, Then She Fell achieves a depth and intimacy that makes Sleep No More feel like a drunken Chelsea nightclub (which, on one level, it is). There's a lot to process in this remarkable show, but having thoroughly explored the facility and drawn my own conclusions, I've come to think that Alice isn't stuck in Kingsland Ward because she fell. She was pushed.

Then She Fell takes place at The Kingsland Ward at St. Johns, located at 195 Maujer Street in Williamsburg, Brooklyn (just 2 blocks off of the L train at Grand Street). Tickets are not cheap, which is understandable considering only 15 are sold per show, but they are worth it.

#alice in wonderland
#alice liddel
#opinionist
#theater review
#then she fell
#original
Do you know the scoop? Comment below or Send us a Tip