Follies and a Facelift at the Guggenheim This week NY Mag has a scathing analysis of Thomas Krens' tenure at the Guggenheim, calling the air around the museum during his 17-year reign "distorted and toxic." Writer Jerry Saltz says the museum is beginning to recover only now, two years after Lisa Dennison, who is now leaving to become executive vice president for Sotheby's North America, replaced him when he left to run the Guggenheim Foundation.

Krens gets blasted for bungling what he calls "the next generation of Guggenheim museums" - when was the first generation, asks Saltz. Take, Guggenheim Abu Dhabi, which was announced last summer, just days before the war between Israel and Lebanon. Frank Gehry hadn't even begun designing it. And then there was that issue involving travelers whose passports bear Israeli stamps - they are denied entry visas to the United Arab Emirates. Oh, and the triple threat of homosexuality, nudes and "anything deemed 'controversial.'" 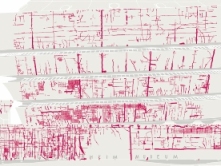 Meanwhile, back at Fifth Ave and 89th St., changes are afoot, as evidenced by scaffolding and hard hats, reports the NY Times. For the last three years, engineers, conservators and architects have been studying the bowels of the Guggenheim to map out the $29 million renovation of the spiraling Frank Lloyd Wright building. See this graphic of the cracks in the walls at the Guggenheim.

The plan, to be completed by next summer, involves renewing the facade, repairing decayed sidewalks and outdated mechanical systems, upgrading the cooling systems, updating elevators and bathrooms, and improving windows and skylights. Apparently the original building lacked insulation and there is a need to deal with gaps left from the 1992 restoration project by architect Charles Gwathmey.

There are a lot of fun details in the Times piece by Robin Pogrebin. For example, engineers and architects are scrambling to find materials that are compatible with those that Wright used, such as gunite, the spray-applied concrete that allowed him to create those smooth, unbroken curves.

And Nextbook ran a piece recently in which one European architecture critic's Guggenheim theory resurfaced. Bruno Zevi in a 1974 speech to the Congress of Italian Jewish Communities called the museum "the architectural incarnation of Jewish thought," partly for its state of permanent revolution. We wonder what Frank Lloyd Wright would have said about that!