So the mystery performer at the pre-NBA All-Star Game Concert this week isn't going to be Rihanna—it's actually going to be her collaborator and awards show stage crasher Kanye West. Better hide your Beck albums, Flatiron residents!

The concert is being produced by Jay Z's Roc Nation, and it's called the 1st Roc City Classic. There had been worries that it would cause some commotion, so Roc Nation sent an email outlining what's going to happen:

TO RESIDENTS AND BUSINESSES IN THE FLATIRON DISTRICT:

On Thursday evening, February 12th, between 8:00 p.m. and 9:00 p.m., there will be a live musical performance, "Rn. 1st Annual Roc City Classic." It will take place on the North Flatiron Plaza (23rd Street between Broadway and Fifth Avenue).

Set-up for the event will be contained to the North Plaza and curb lanes in the area beginning at 12:01 a.m. on Tuesday, February 10th until the conclusion of load out Friday, February 13th at 7:00 p.m.

Starting at 6:00 p.m. on Thursday, February 12th, Broadway and Fifth Avenues, between 23rd and 26th Streets will be closed to vehicular traffic by NYPD, for the assembly of the audience. Based on these closures, vehicular traffic will be impacted on West 24th and West 25th Streets, between 6th Avenue and Broadway. However, local traffic will be allowed on both of those blocks and access to parking garages, hotels, loading docks, and local deliveries will be maintained during the times of the concert.

For residential or business inquiries regarding the event, you can reach out via email to flatironevent@rocnation.com. You can also call Elliot Winick, the site coordinator, with any logistic questions. He can be reached at (212) 663-­-5564 (office) or (917) 885-0844 (day of concert only).

Additional ticket information can be found at RocNation.com and power1051fm.com.

Now we're wondering if RiRi and a whippersnapper/ELO fan named Paul McCartney might be joining in: 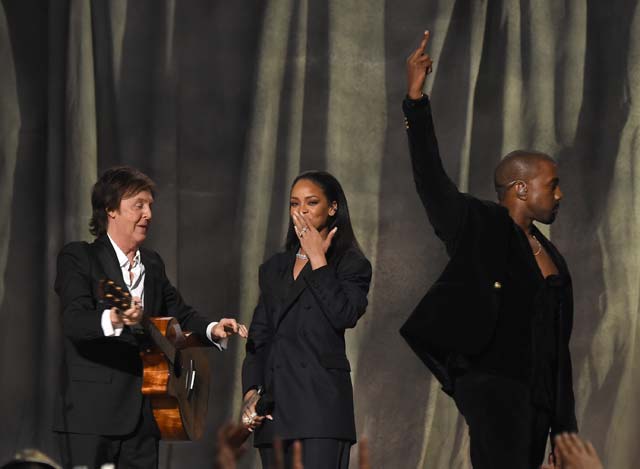 #kanye west
#NBA All Star Game
#rihanna
#roc nation
Do you know the scoop? Comment below or Send us a Tip