Flashback: Time To Bring In The Earthquake-Proof Depthscraper!

Maybe it's time to revisit the Depthscraper? According to Modern Mechanix, back in 1931 some of Japan's engineering brains were devoted to creating earthquake-proof structures. Noting that tunnels and subterranean structures suffer less in seismic tremors, they proposed the Depthscraper, "whose frame resembles that of a 35-story skyscraper of the type familiar in American large cities; but which is built in a mammoth excavation beneath the ground."

Basically it is like a movie villain's underground lair, or the place that rich and/or famous people get to go when they are chosen as the people to keep the human race going prior to an impending apocalypse.

At the time, Modern Mechanix wrote that "the logic of the Depthscraper is convincing and, although such construction appears too costly for most residences in a district where land values are not excessive, for business buildings it offers a degree of safety against earthquakes (as well as hurricanes) not to be disregarded in a country which is subject to them incessantly."

In New York, we've had our own share of earthquakes, with one 5.5 magnitude earthquake happening in 1884. Not to mention John Armbruster at Columbia University's Lamont-Doherty Earth Observatory has maintained that we can expect an earthquake with a magnitude of 5.0 here once a century, and in March noted we were long overdue. 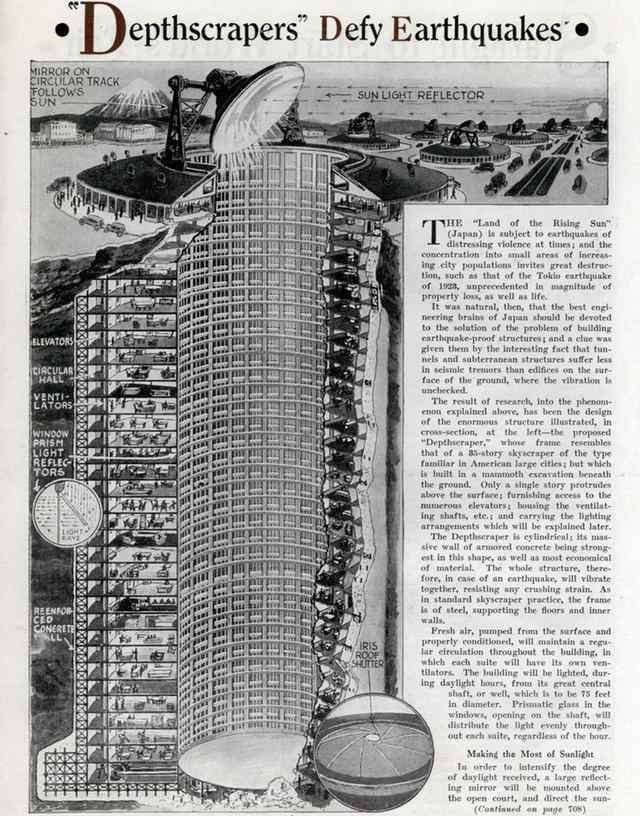