Flashback: About That Suburban Home On 5th Avenue 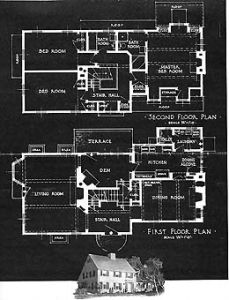 Earlier this week we ran a photo from the LIFE magazine archives showing the above snowy scene on 5th Avenue and 48th Street in 1947. In the background of the photo was something unusual: a house. Not a very old house for the time, either—more like a brand new one you'd see in the suburbs around then.

So what's the deal, right? We asked the Inside the Apple folks if they had some information about it, and it turns out they did! They report back: "It is almost certainly a prefabricated five-room 'cottage' put up by the Spence-Chapin Adoption Agency in December 1947. According to the Times, the house—valued at $12,000—was to not only 'serve as headquarters for [the agency's] fund drive' but also would be raffled off at the end of the campaign." A Times article described that intersection as "Fifth Avenue's suburban corner...where country cottages are displayed for good causes."

By the next year the house you see was gone and a new one was built; this time in conjunction with the release of the film Mr. Blandings Builds His Dream House, starring Cary Grant. In the story, Grant's character flees New York City to build his dream home—but in real life, he got to have both... at least for marketing purposes. Before the film hit the big screen, General Electric and other manufacturers built nearly identical "Dream Houses" across the country (blueprint pictured)—NYC's was on this corner. More information on the dream homes can be found here.

#1947
#charity
#flashback
#model home
#Mr. Blandings Builds His Dream House
#Spence Chapin
Do you know the scoop? Comment below or Send us a Tip