The former site of the U.S. Mortgage and Trust Company at 74th and Madison Avenue is a relic from the neighborhood's gilded past. The beaux-arts building first opened its doors to the bank's well-to-do clientele in 1922. Today it is essentially the same building it was a century ago, but with a brighter facade, new floors of Botticino marble, and an Apple logo above the bronze doors.

The Upper East Side's new Apple store knows where it stands with the public. It strives to be as inconspicuous as possible, to humbly pay tribute to tradition. And everyone we spoke with outside the store on Thursday seem to think it succeeds.

"Frankly, they usually do things with so much style, it'll fit into the neighborhood," says Upper East Side resident Arlen Kane. "It's not some crazy supermarket or something, it's Apple."

At a press preview yesterday, Jason Barlia, a market director for Apple, made it clear that fitting in was essential to the success of the store. "This store is really built for the community that surrounds it. This is a store that was built for the families, schools, and small businesses that are in the neighborhood."

Barlia stressed that the store—which opens to the public on Saturday—was by far the "most intimate" in the city. It does appear to be smaller than the rest, but it comes with a private room on the lower level—the refurbished bank vault—for patrons getting fitted for rose gold Apple Watches. The main showroom is hung with black and white photos from a slightly obsequious series called "Portraits of the Upper East Side," the subjects of which include a couple of forlorn-looking dogs and a man and his tennis racket. It's all excessively non-threatening to the integrity of the neighborhood. 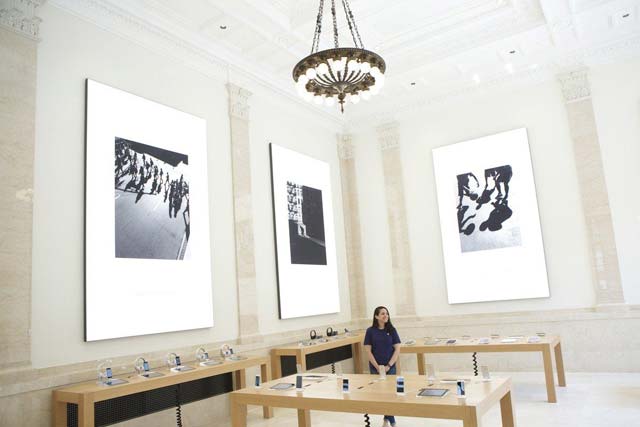 So what is Herbert Feinberg so mad about? The local Apple store opponent is so intent on making it disappear that he filed a lawsuit against the company last week, arguing that Madison Avenue "is one of the great New York City Streets ... [and local residents] are opposed to the congestion and commercialization of the neighborhood that the store will bring." Others agree, worrying that the infamous long lines will ruin their real estate values.

"I have no idea what his objection is, except that he's a grumpy old man," says Peter Kuhn, who lives on East 74th Street, not far from the 89-year-old Feinberg. "My heart bleeds for that multimillionaire."

Kuhn points out that 33 East 74th Street, directly across from the new store on Madison Avenue, is new construction consisting mostly of condos. The building's website shows that there are four remaining available units, all asking for upwards of $14 million. The penthouse costs $39 million.

Shahriar, the owner of Chi Cashmere, two doors down from the Apple Store, seems to share Peter Kuhn's optimism. "As a business owner, I think it’s very good. I think these two blocks here needed an impetus of youthful energy." The Upper East Side is so young and hip these days!

#apple store
#real estate
#upper east side
#original
Do you know the scoop? Comment below or Send us a Tip