When the Bloomberg administration rezoned a large swath of the north Brooklyn waterfront from industrial to residential back in 2005, the ensuing turbo-gentrification was supposed to be balanced with a vital public benefit: increased waterfront access and nearly 30 acres of parkland at Buswick Inlet. But while the shiny luxury towers marched steadily across Williamsburg and into Greenpoint, the promised parkland has remained maddeningly elusive. And though Bushwick Inlet Park is finally moving forward, its completion is still a long way off. In the meantime, to the south, there's now a beautiful new gem filling five acres on Williamsburg's Southside. It's much better than nothing.

Dubbed Domino Park, the sparkling new privately-owned public park is located just north of the Williamsburg Bridge, on the former site of the Domino Sugar Refinery, which operated at the site from the 1880s to 2004, producing almost all of the sugar sold in America for generations. That property was acquired by powerhouse Two Trees Management in 2012, and is currently being developed into an 11 acre mixed-use "community" consisting of several residential towers and a commercial office complex in the landmarked refinery building. The first of those residential buildings, a square-doughnut shaped building at 325 Kent, opened earlier this year across from the new park. The other buildings on the site will be under construction for the next several years, but Domino Park opens this Sunday. 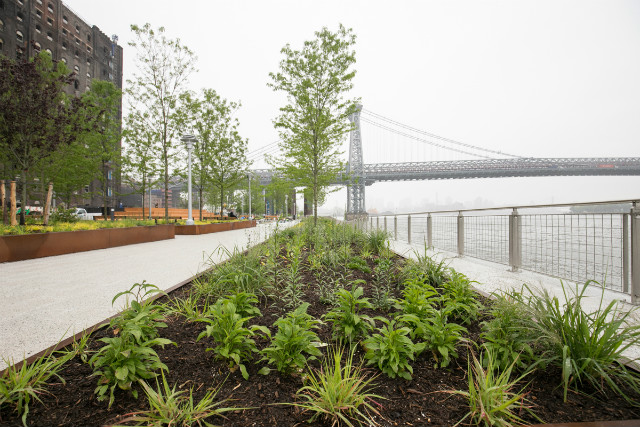 Designed by James Corner Field Operations, the lead designers of the High Line, the quarter-mile long park artfully incorporates numerous artifacts from the old refinery. Most striking are the tall turquoise gantry cranes that once upon a time hoisted raw sugar off of boats to be stored in the warehouse until it was refined. The old crane tracks have been turned into gardens boasting 100 species of plants, and dozens of pieces of salvaged machinery have been thoughtfully sprinkled along the waterfront, culminating at the south end with four 36-feet tall cylindrical tanks that collected syrup during the refining process.

All that industrial history is balanced with an eye toward riverfront leisure, verdure, and recreation. There are some inviting patches of lawn for thong bathing, but the park is not grassy in the way that Brooklyn Bridge Park is—during a tour of the site last week, designer Lisa Switkin stressed that one of the community's top requests was for activity space. So there's a beach volleyball court and two bocce courts, a 6,300-square-foot playing field for soccer, a little dog run, and a whimsical sugar refinery-themed playground designed by artist Mark Reigelman, who you may remember from those smoking buildings that mysteriously appeared on Manhattan streets back in 2012. 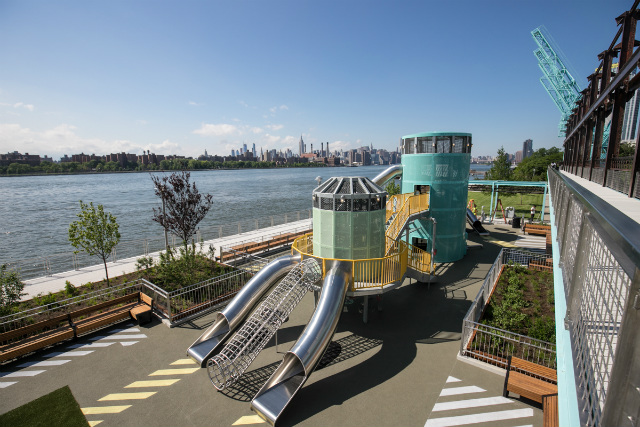 A new catwalk running through the giant gantry cranes evokes the refinery interior while offering a pleasant perspective on the park, and of course the views of the Manhattan skyline are spectacular from anywhere along the park's esplanade (which was raised two to seven feet above the new FEMA flood elevations in preparation for the next superstorm Sandy). All of the wood at the site, from the permanent deck chairs to the river "viewing steps" was reclaimed from the old factory floor, and a mix of some 175 trees are springing up around the park.

The most dramatic feature is toward the south end, just past an array of eight-feet-high illuminated water jets that can be specially programmed for kinetic fountain displays. Steps away, a section of the pier has been cut away to reveal the dramatic tidal sloshing of the East River beneath visitors' feat, as it rushes in against the bulkhead. The drama is enhanced by several hidden steam vents that periodically release a poof of noirish fog. Instagram Nirvana.

And at the center of the park, just next to the playground, an open air cafe is occupied by a new Danny Meyer venture: Tacocina, offering tacos, snacks, Mexican beer, and cocktails. We're told tortillas are pressed "using a heritage breed of corn from coastal Oaxaca in southern Mexico." Of course. They'll be operating seven days a week, from 11 am. to 11 p.m. 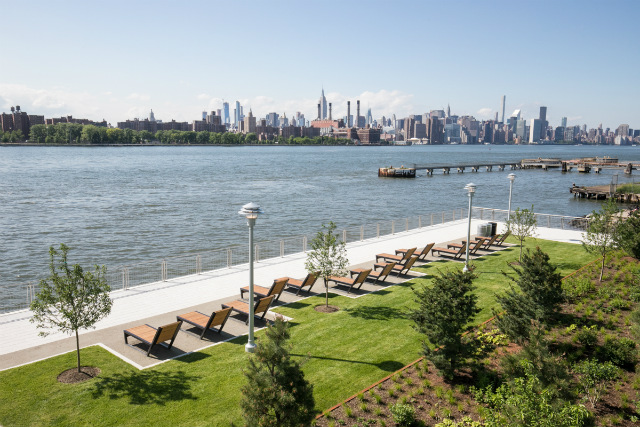 The whole thing amounts to one hell of an amenity, which Two Trees spent approximately $50 million to build. The park will no doubt go a long way to boost business at the luxury residences and office space that will continue to rise up at the site over the coming years, but Domino Park already appears to be an enormous boon for everyone who lives in the neighborhood, which has never enjoyed this degree of access to the waterfront.

Domino Park is located along the East River in Williamsburg between Grand Street and South Fifth, and will be open daily from 6 a.m. to 1 a.m., starting Monday, June 11th. This Sunday, June 10th, there is a public grand opening event from 12 p.m. to 4 p.m. Park entrances are along Kent Avenue at South 5th Street, South 3rd Street and Grand Street.

#domino
#domino park
#new domino
#park
#two trees
#williamsburg
#original
Do you know the scoop? Comment below or Send us a Tip