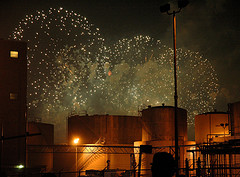 Williamsburg's state park sort of opened back in May, with weekend-only entry times. The park will go full time starting July 3rd, just in time for the following days fireworks. There will be plenty of time to stake out some precious real estate for the extravaganza too, as the park will open at 10am on Wednesday.

Come Wednesday evening, Northside Williamsburg will become the 50-yard-line luxury box for July 4th fireworks viewing in New York City. That, according to East River State Parks staff, who revealed this weekend (to anyone who asked) that the park will be open from 10 am Wednesday morning until just after the Macy's fireworks display ends.

With the Independence Day incendiaries being launched from three barges in the East River between 23rd and 34th Street, the new park is situated perfectly to give Brooklynites an unobstructed view, with the pyrotechnics reflected in the river and the Midtown Manhattan skyline as a picture-postcard backdrop.

In past years crowds would hang out on the dead end streets and vacant lots in the area, so we imagine the lawn will be plenty crowded in a few days. A word to the wise: leave your alcohol, pets and illegal fireworks at home. However, grilling will be allowed! More on the park going full time here.