Finally, Emily Roebling Gets A Street Named After Her When Emily Roebling died in 1903, twenty years after overseeing the construction of the Brooklyn Bridge, she didn't quite get the treatment that her husband Washington Roebling or his father John A. Roebling got. In fact, it was only earlier this year that the NY Times gave her a proper obituary, noting that she "was instrumental to one of the greatest architectural feats of the 19th century... Connecting Brooklyn and Manhattan for the first time."

The daunting (and deadly) Brooklyn Bridge construction may well have failed if not for Emily, who took over the project—which upon completion was dubbed "the 8th Wonder of the World"—when John Roebling died and her husband Washington fell ill. That's when Emily "stepped in — managing, liaising and politicking between city officials, workers, and her husband’s bedside to see the world’s first steel-wire suspension bridge to completion."

She would walk down to the construction site from their home in Brooklyn Heights, and essentially became chief engineer of the project. She was also the first person to walk over the bridge. (Click through for some photos when the Bridge was being constructed and just after it opened.)

Emily's name is on the bridge's plaque, along with the two male Roeblings; it reads: "The Builders of the Bridge / Dedicated to the memory of Emily Warren Roebling (1843-1903) Whose faith and courage helped her stricken husband / Col. Washington A. Roebling, C.E. (1837-1926) Complete the construction of this bridge from the plans of his father / John A. Roebling, C.E. (1806-1869) Who gave his life to the bridge / Back of every great work we can find the self-sacrificing devotion of a woman."

And this week she got a sign of her own. Positioned at the intersection of Columbia Heights and Orange streets in Brooklyn Heights, which she likely walked by many times, you'll find the Emily Roebling Way street sign (pictured below). 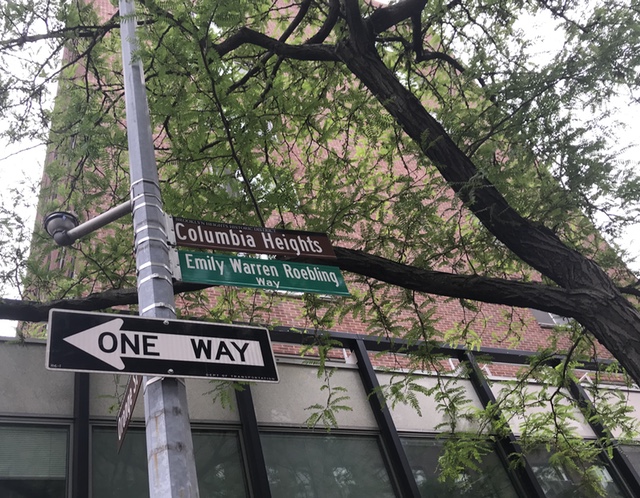 "When the construction of the Brooklyn Bridge was completed in 1883, its acting chief engineer, Emily Warren Roebling, led the procession of awestruck New Yorkers. She led the way back then, and through her legacy she continues to lead the way today,” said Council Member Stephen Levin at the unveiling. He continued:

“Though her circumstances are unique, Emily fought to prove that talents and ability are not the exclusive domain of one gender. Her story, one of determination, ambition, and intellect is one we are fortunate to have. But there are countless of other overlooked stories we will never know. The same way Emily fought for equality in the 19th century, we must continue to fight today. This commemoration is one symbolic step to show we will continue the work Emily Warren Roebling started."

Okay, but let's consider a statue, too.

#brooklyn heights
#emly roebling
#street naming
#street sign
Do you know the scoop? Comment below or Send us a Tip