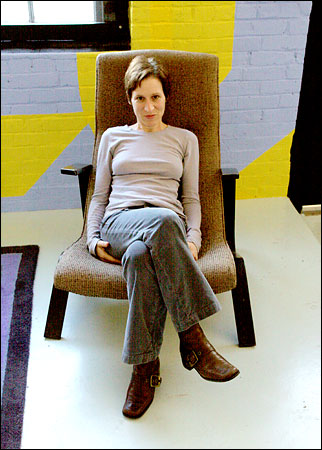 In her new movie Wendy and Lucy, filmmaker Kelly Reichardt follows a desperate young woman (played by Oscar nominee Michelle Williams) as she attempts a perilous journey from Indiana to Alaska in search of employment, accompanied only by her dog.

Reichardt's previous film, Old Joy, received a lot of attention in the indie film world as well as critical acclaim for its understated elegance, and her latest feature is generating similar buzz. (Both films are adapted from short stories by Jon Raymond.) We spoke with Ms. Reichardt recently about her unique, economy-driven films. Wendy and Lucy will have a two week engagement at Film Forum from December 10th to December 23.

Oregon has been the location for your last two films. Aside from Jay Raymond's association, what is it about Oregon that has inspired you to film there? My producer Neil Kopp lives there. Tod Haynes [Executive Producer] moved out there about 10 years ago, who's a close friend, and I've been going out there ever since. I just have a big attachment to the place, I have to say, and my crew's out there now, so now I have a whole crew out there. But really it has to do with John Raymond writing for what's out his window.

Was everything filmed in and around this one particular town? It was in and around Portland. We were not really playing it for Portland, but more for just small town Oregon. We did some in Salem, and then Portland and all the sort of outskirt areas around there.

At one point Wendy walks by a large wall with the word "Goner" written in graffiti - a very strong image. Was this something you found when you started shooting? We'd been filming at that place a long time, because that wall is right near the Walgreens where Wendy's car is. There's a little corner there. It's actually very close to where John lives; he can like see that wall from his house. The graffiti's forever changing, so every time we went back to film... That was like one of the trips that Michelle and I went back on our own and we just were filming with the local cinematographer and visiting some locations to get some more shots, so when it said "Goner" there, I said, "Oh, that's too literal, I'll never use that shot, but I might as well get it." And I've come to realize I see that graffiti all over. It's a record label. Just as a side note, I was sitting in someone's apartment and I saw that same graffiti on a sticker and I said, "Oh, what the hell is that?" and they said, "It's a record label." I wasn't using it like that! It was just there. It was there!"

How much did the town end up influencing the shoot? I scouted for like six months, all over America. I started in New York, I went down to North Carolina and then went all the way down south 'cause it was the winter. Then I went up to Portland, then I went out to Montana. I mean I really just drive. For both Old Joy and Wendy and Lucy it's been like that, where I've driven around the country for six months and then end up shooting from the places that John's written about. Then we scouted for like a month or two in and about Portland and Washington, and you're just trying to find each spot that will add another piece to the story. But that Walgreens was such a hard space, with the big beige wall. I'd just drive there at night and sit in my car and say, "What the hell am I going to do with this big beige wall?"

Something that permeates the movie is silence. Not only is there relatively little talking, but there isn't even a soundtrack aside from Wendy's humming. What made you decide to go without music? I was using the train sounds as a score. So wherever I would have used music, I was using trains. And just the general sound of the commerce, that was sort of the idea. Yeah, there's not much in the way of music going on in this one.

Yo La Tengo was in charge of the soundtrack for Old Joy. Yes, they're friends and they did that one. Which was really nice and great, but I just didn't want to romanticize the situation too much or give it too much melancholy. I already had the dog theme going, so... Got to be careful. 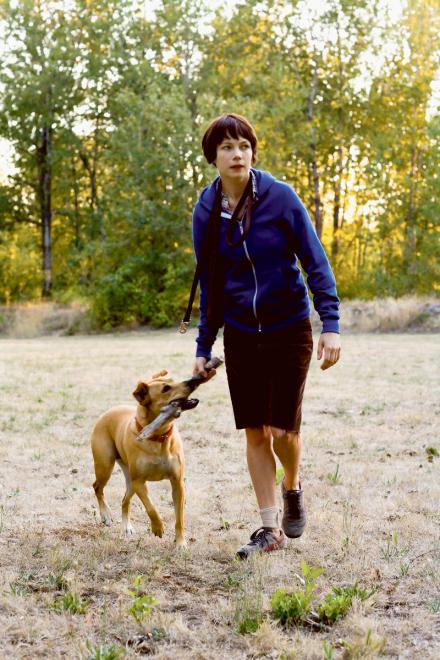 Lucy is actually your dog, right? How much did your experience as a dog owner affect Wendy's relationship with Lucy? She's a rescue, so she just doesn't like to be left, so whenever she'd be left in the film or tied up she'll whine and she'll want to get to wherever anybody is. But Michelle and I would go to the park and play with her and develop a little bit of a bond with her, so that Lucy would respond to her. When I got home and I was editing and I'd be cutting in my apartment all day listening to Michelle call Lucy, and then I'd go to that park with Lucy and I was all of a sudden like, "Oh my God, that bitch!" [laughs]. I hear myself, and I'm sure Michelle—it became obvious to me only later when I was home and editing that some of the ways she was with Lucy is a lot like how I am with Lucy.

Does Michelle Williams own a dog? No. She's got a kid, what does she need with a dog? She talks about getting pets all the time, but I try to talk her out of it. She travels too much.

One scene that is quite gut wrenching is when Wendy has to leave Lucy tied up outside of the grocery store. As a dog owner, I felt like I would have done anything to make sure Lucy didn't have to stay out there unprotected, and I wanted to scream when Wendy didn't put up much of a fight. I think that has to do with what different people expect from authorities, and I think there's a huge part of the population that does not anticipate help from the authorities, and feels that cops will really just make their lives worse. Even for myself, I wouldn't necessarily trust with what would happen. I'd rather deal with it myself than have some law enforcement take my dog. For me, I just didn't think that someone in Wendy's situation would be looking for any kind of bureaucracy or police to be able to solve any problems for her.

Even by the end of the movie, little is known about Wendy's past and there are still a lot of questions left unanswered. Why did you decide to leave everything so open ended? Do you and Jay Raymond have the answers to those questions? The idea was just that she would be a stranger, and the film has sort of proven the question to some degree. Do we have any responsibility to each other? What's our obligation to each other? And the way she just runs into people in the film, and comes across them, they don't know her whole story, and that was how I wanted the audience to be with her.

As if like, you know, when you're on the subway and someone approaches you and asks you for a handout, you have this really brief period of time to make a decision about whether or not you're going to help them, and what is that decision process that you go through. You check out what they're wearing. You wonder: Are they in that bad a situation that they get my dollar? You do this quick survey without really knowing the details of anyone's life.

And it's a moment in time, so I was not interested in laying out some back story for her. I created a back story for Michelle, she needs to know where she's from and what she's been through, but I didn't feel the need to lay that on an audience, and I think what happens next completely has to do with each viewer: Is the glass half full of half empty? It's just supposed to be a moment in time, and yet you don't have the benefit of knowing that it all gets wrapped up.

In many ways, the character we end up knowing the most about doesn't even have a name: the security guard. He is also the only character who really helps Lucy, despite his own life struggle. How did you find Walter Dalton, and how did that character progress? He's a stranger, too. Everybody's a stranger. Dalton came into an open call in Portland. He lives in Seattle, and we were doing these open calls and in walks Walter Dalton. He's great. We took such a fast liking to him. He's just great in life. The guard actually did have a name, and then he just became "Wally" because Wally was so—he's sort of like the character, just super warm and great, smart and funny. He was a really good find.

Since our economic situation has been declining so rapidly, did you find that the story needed any adjustments? No. We wrote the outlines to this film in the wake of Katrina. The decline of everything, for the entire length of the Bush administration, the gap between the rich and poor, has been spreading and deregulation has been wild, and everyone knows that everybody's living beyond their means. Everyone's always been saying, "The bubbles gotta crash," and of course it has to crash. That anyone is taken aback by the situation we're in... It just seems like the writing's been on the wall for a long time. Katrina made everything so clear about how Americans feel about other Americans that are in poverty.

As New Yorkers, we can sometimes be a bit sheltered from the rest of the country. It might be hard to relate to Wendy's situation. What would you hope New Yorkers can take from Wendy and Lucy? Everybody's sheltered. The only people who aren't sheltered are the people who are close to the situation. Everybody's living in their little world. I think in New York they're sort of less sheltered. Just public transportation alone pulls you into the big black hole of other people's lives. As where if you lived somewhere where you can always just get in your car and bypass areas that make you uncomfortable, you can feel much less connected. I guess every place is its own bubble.

What do you foresee for people like Wendy? It would be great if you left [the movie] with one idea and the person next to you left with another idea. Those questions are too big for me. It's a new day; there's new hope in the air. Hopefully... We'll see. Time will tell. There's already—as much as the economy has gotten worse—it's really exciting watching Obama get elected and it's exciting... We've somehow—some of us—have survived the Bush years. Not everyone has survived, certainly. We will see. There's hope, you know, there's hope now.