Fighting For the Right to Photograph 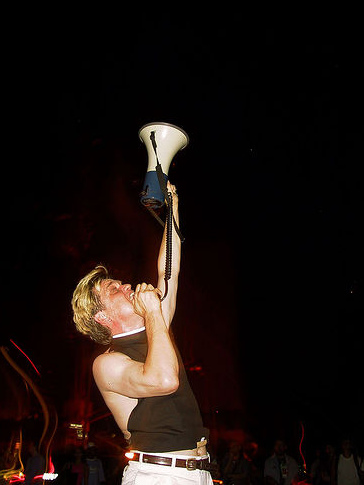 Last month Reverend Billy was locked up for reciting the First Amendment in Union Square. Tonight he returns with a troupe of others to speak out against the outrageous new law that would limit public photography and filming in New York.

Currently there are 2,285,188 photos tagged "New York" on Flickr, and that's just one photo sharing site, imagine if the number stopped there and we lost future images of the city. A new group has sprung up called Picture New York, and they ask you to do just what their name suggests:

"Picture New York WITHOUT pictures of New York. The most photographed city in the world is about to be shut down visually by proposed regulations which would basically make it illegal to film or tape in NYC without a permit and a million dollars of insurance.

An overnight, massive grassroots fight against these proposed regulations has sprung up under the name 'Picture New York.' Fighting back with YouTube videos, petitions, handwritten letters, a website, Flickr space and a rally and press conference this Friday in Union Square, this ad-hoc group of working artists, photographers and filmmakers vow to stop the regulations going into effect as scheduled in September from the Mayor's Office of Film, Theatre, and Broadcasting (MOFTB).

Albert Maysles, Patti Smith, Michael Stipe and Amy Arbus are among the celebrated artists who have already signed on to demand the MOFTB extend the period of public comment, currently ending August 3, and eliminate the proposed regulations: 11 pages of single-spaced rules where none existed before."

Join the good Rev Billy and his Stop Shopping Gospel Choir, the Rude Mechanical Orchestra, Critical Mass bike riders, and the above mentioned Picture New York tonight in Union Square. Fight for your right to Flickr! And no, the rally does not have a permit, so wear your comfy shoes incase you end up in the slammer. Details: Tonight at 6:30pm at the north end of Union Square.

Super Deluxe has a pretty funny video of some guys rapping and filming around New York. Watch it here (it comes with helpful suggestions on what to do if the law passes, such as: shoot from Jersey with a zoom lens, dress a tripod up like a dude and much much more).