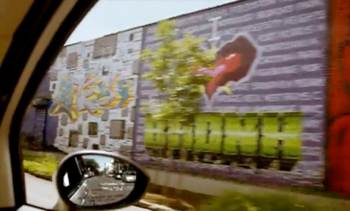 One loose end in the saga of Jennifer Lopez's controversial Fiat car commercial has been tied up: The carmaker has settled with NYC street artists, TATS Cru ("The Mural Kings"), for showing one of their Bronx murals in the ad, after they sent their lawyer to ask Chrysler (which owns Fiat) and ad agency Doner WTF. Wilfredo Feliciano, a TATS Cru member, said, “People are saying, ‘It’s in the public, and public is public.’ But music can be out in public. I’m pretty sure if I took someone’s music and did my own thing, somebody wouldn’t be happy about that."

The commercial has garnered a lot of attention for the fact that Bronx native J.Lo didn't even set foot in the Bronx for the parts filmed here (a body double was used instead). Feliciano said friends contacted the TATS Cru, congratulating them on being in the ad, but they had no idea about it, "Here’s a corporation coming into the Bronx, trying to sell something to the Bronx and not compensating Bronx artists for our part. Is that okay? I don't think so. What’s right is right. And what's wrong is wrong."

Fiat released a statement, days after releasing a statement about the body double, "The Fiat brand recently learned of a copyright issue involving a graffiti mural created by the Bronx-based artists TATS Cru, which appeared in the background of a Fiat commercial. It is the Company’s standard protocol to require that its ad agencies conduct the necessary due diligence to ensure that all trademarks and copyrights are respected in the course of producing our advertisements. We are pleased to announce that the parties have reached an amicable resolution to this matter. Details of this agreement are confidential." Also, confidential: How it's difficult a Fiat that is parked in the middle of a stage during an American Music Awards appearance.

#bronx
#fiat
#jennifer lopez
#jlo
#mural
#TATS CRU
Do you know the scoop? Comment below or Send us a Tip