Fey and Phelps Mark the Return of SNL 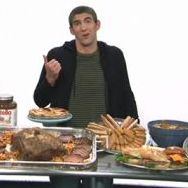 Saturday Night Live has returned, and their season opener featured Tina Fey as Sarah Palin, a now-pregnant Amy Poehler reprising her role as Hillary Clinton, Lil' Wayne as musical guest and Michael Phelps as the host (who didn't take his shirt off during one sketch, not one!).

There's still no word on if Fey will continue her Palin appearances through November (or...post-November?), but she nailed it last night. No word on if the real Sarah Palin has seen it, but ABC News reports that she was flying Jetblue at the time it aired and that the show was available through the airline's satellite TV system.

As for Phelps, the pageant queen may have stolen the Olympian's spotlight--his appearance was overshadowed by Fey playing Palin even prior to the live show. Fey and Palin's looks have been compared since day one, and Poehler's Clinton even accused Fey's Palin of getting to the White House by gliding in "on a dog sled wearing your pageant sash and your Tina Fey glasses." Back to Phelps, they kept him mostly quiet with only a few lines, but the Michael Phelps Diet short was good for some laughs.