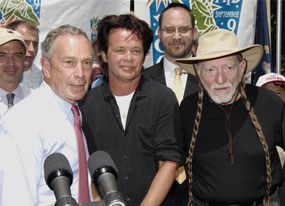 Country and city will converge as American farmers get support from a Farm Aid benefit concert held in New York - taking place on Randall's Island this September 9th.

The announcement came yesterday from Farm Aid co-founders Willie Nelson and John Mellencamp, along with Mayor Bloomberg. The press conference came after the trio chuckled over marijuana jokes (seriously) and chowed down on some fresh produce in the market.

Farm Aid has been supporting family farms through concerts since 1985 (raising over $30 million), with a mission of "changing the system of industrial agriculture, advocating fair prices and encouraging people to buy locally grown food that is organic and humanely produced." The nature of the organization has some speculating Mayor Bloomberg's announcement is an attempt to gain more national appeal, as the importance of family farms is not necessarily a main concern of New Yorkers. For now, he says he made the decision as it will generate nearly $13 million of economic activity and help area farmers that sell their product in green markets here.

Pollster Scott Rasmussen said the Farm Aid concert is something that could come in handy when the Mayor travels the country (as he is briefly next month, to Missouri). He added, "If the mayor is trying to keep people thinking that he is thinking about running for president, it's a perfect event." As far as Farm Aid goes, their bloggers couldn't be more excited about the city fest, writing:

"Can you believe it?!?! Farm Aid in NYC! I have been working on a pun that references the movie "Babe: Pig in the City" but I haven't quite figured it out yet. We are so pumped about Farm Aid 2007: A HOMEGROWN Festival at Randal's Island. 100% delicious family farm food, good tunes and a summer of events in a huge urban food and farm hub. On the DL, this show has been in the works for a few years and we are just thrilled that the time has come to bring Farm Aid into the lives of New Yorkers, to work with upstate farmers and urban growers and to show all of our concert growers that even after 22 years we have a few surprises up our sleeves!"

The lineup will include Nelson, Mellencamp, Dave Matthews and Neil Young. Other artists will be announced in the coming weeks, and will include roots, rock, reggae and country bands. Ticketmaster will begin selling tickets Saturday at 10am.