When Ron Galella was born in the Bronx back in 1931, he didn't realize that one day he'd be brushing elbows (or getting punched) by celebrities hobnobbing in Manhattan. But now the 83-year-old photographer—the "King of Paparazzi" who was famously sued by Jackie Onassis—gets to relive the glory days of Studio 54 and his other escapades in the "bad old days" with his latest book, Ron Galella New York.

Galella's photographs had been featured in the digital gallery of District M, at the Times Square hotel Row NYC. Then Galella compiled them into the book! To celebrate the publication of the book, the hotel created a "Ron Galella Suite" with prints of some of his famous photographs. We recently spoke with the legendary documentarian of who's who about his inspirations, confrontations and future plans.

Galella tells us, "I got inspired by E.B. White, the writer, and his essay called 'Here is New York.'" Galella graduated as an art major, and his first job, in 1949, was as a ceramicist for Associated American Artists, where the Port Authority Bus Terminal is now. "I worked as a ceramic artist there, I used clay as my medium to sculpt my heroes," he said. The job opened up a new world for Galella. "Working in the city allowed me to explore and adventure. Manhattan is the greatest place to shoot because everything is concentrated in a small area," he reminisced. "Restaurants, hotels and discos... I visited all of the historic sites and enjoyed the great food and enjoyed the restaurants, saw some Broadway shows. Very quickly I fell in love with the city, it became my girlfriend. You see I never had a girlfriend at this time."

Then the Korean War started. To avoid getting drafted, he enlisted for four years into the Air Force, applying for a position in photography. He was assigned to Lowry Air Force base in Colorado to study photography, which began his formal education. "After discharge in 1955, I went to the Arts Center of Design in California majoring in photography using the GI Bill," he said. After he graduated in 1958, he moved back into his father's house in the Bronx. "I was too poor to have a studio in the city, that's why I went to my father's house and built a layup in the basement," Galella said matter-of-factly. "New York City became my studio... Which was good because if I had been rich and gone to Manhattan like Francesco Scavullo, Richard Avedon, I would have become another studio photographer which, really, there's too many of them. They're commercial." 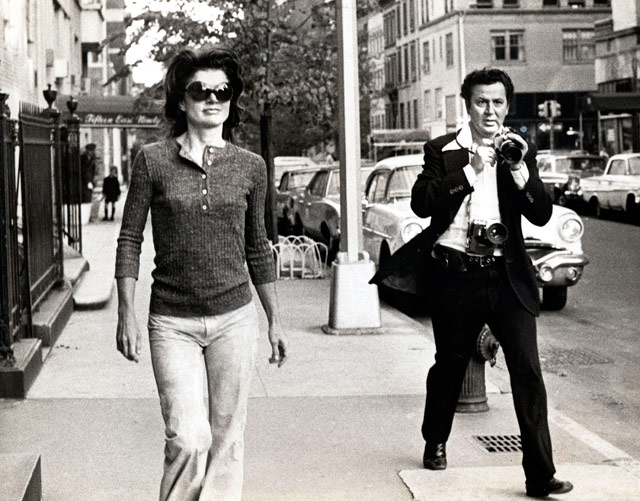 "By shooting on location, I got celebrities being themselves in their environment, and that's my forte. They see a studio photographer who has the advantage of background and lighting, bigger negatives and all that, they don't get the celebrities to be at ease and be themselves. Under pressure, they try become something else than they are, but I catch them as the Real McCoy, I catch them as they are, genuine emotion, because they disregard me and my camera. And that's why my style was good," he said. "Like I got Jackie walking down Fifth Avenue because I was hidden in the taxi and I got those pictures." 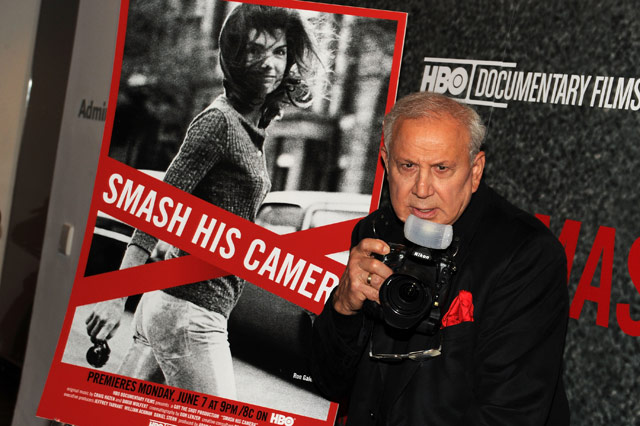 Ron Galella, at the premiere of 'Smash His Camera,' with his iconic Jackie Onassis photograph in the poster (Getty Images)

Galella doesn't think much of today's paparazzi photographers. "I consider myself an artist. I drew, I painted, I did ceramics, and I studied the great masters of yesteryear, composition, etc. But I think the photographers today, especially the paparazzi, they are not trained in the art world and they just do it for money. That's their motivation, which I think is poor," he lamented. "The photographers today… it's a different scene today. When I was shooting in the sixties, seventies, it was one to one, it was easy to maneuver to get good composition and angles. But today its become too crowded with too many photographers and too many fans and too much security. Everything is very bad circumstances to get great pictures, and they all end up with the same type of picture and I wouldn't do what they are doing in LA especially, it's just stupid."

Naturally, Galella has some thoughts about Alec Baldwin, whose confrontations with paparazzi led him to lose his temper and his MSNBC show. "I think he's a jerk, really," he laughed. "I think he's sort of acting, he's sort of acting to support the people who are against paparazzi and I think he's not really serious, I think he's just acting. The first time he did something, a photographer shot his baby coming out of the hospital or something like that, he smeared shaving cream over the windshield…. [He] doesn't really mean what he does. And he's getting publicity, which is another thing." 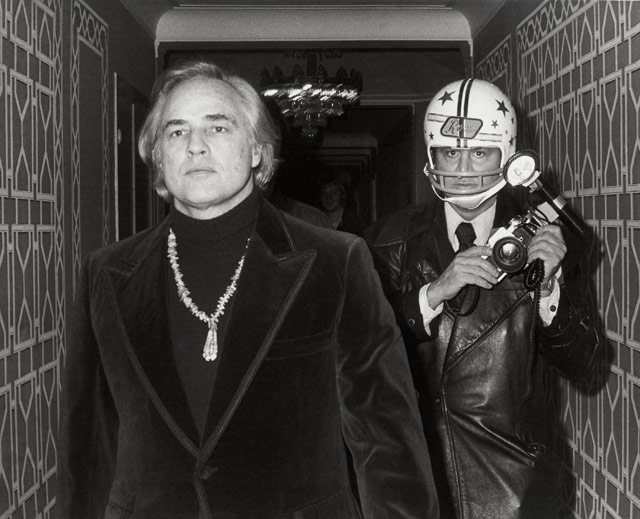 While Baldwin has shoved photographers, that's nothing compared to what Marlon Brando did to Galella, who confirmed that Brando was "worse" than Baldwin. "In Rome, paparazzi shot his kids and he ran after them with a broken bottle but he never caught them. But the sock that he gave me was a sucker punch, I didn't even see it coming," he recalled. "Dick Cavett was with him after a show in Chinatown, I took about ten shots, and [Brando] called me over and he said 'What else do you want that you don't even have?' And I looked at Cavett, 'cause Cavett knew me and Brando did not, and I said, 'How about without glasses?' That's when Brando slugged me."

Galella says he almost "bled to death" and now has 10 caps from being punched. He sued Brando and settled for $40,000 in damages from Brando, with a third going to legal fees. At first, Galella thought Brando was pissed that the taping of Cavett's show didn't go well, but when he researched his 2012 book about Jackie Onassis, he found that Onassis and Brando had had an affair. "I think he was sympathetic towards Jackie, ‘cause I went after her and all that. That's why he did it." 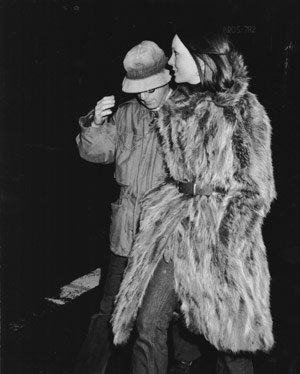 There are lines that Galella wouldn't cross. "I would not provoke them like some of the photographers today, especially in LA because they want to see a star fall on their face or something," he said. Of the photographs of stars without makeup or wearing sweatpants, "[The paparazzi today are] looking for negative vulgar pictures, getting fat, cellulite on their legs. I never did that. That's vulgar and it's not right… Another thing I wouldn't do is go on their property and I wouldn't go in their house of course, without permission." He did acknowledge that aggressive photographers are not new, "All of the paparazzi in La Dolce De Vita did the same thing in Rome, they provoked a star to get more salable pictures, but you see I never do that. I like to capture stars being themselves and genuine emotions and beauty on their face."

He would prowl the midtown hotspots for the stars. "I was staking out Ali MacGraw in the 1970s at the Sherry Netherland—that's where she had the Paramount Suite—all of a sudden I see Robert Redford crossing the street from the Plaza, 'cause he went to Trader Vic's with his family and I got great pictures of him, a whole block," he bragged. "You see, Trader Vic's was open on Sunday when other restaurants were closed , so that's why stars went through Trader Vic's, which was right in the Plaza Hotel, at 58th Street… Another great spot, the Waldorf Towers are good, a lot of stars stay there, Madison Square Garden would be good too, at the press entrance the stars go in and the press goes in there too. But the number one spot was around the Plaza."

Galella was critical of some of today's current crop of "celebrities," noting there are many who are "overexposed with very little talent like Lindsay Lohan and Paris Hilton." He added, "The Kardashians are the worst. They have very little talent but they're beautiful you see, and the way I put it is that even these housewives on these reality shows, they're beautiful until they open their mouths. They become ugly… I think the culprit of this whole thing is TV. Before TV, the movie stars were great, they had talent. But the TV, because they're 24/7, they have to fill these programs, so they get these non-celebrities, these nobodies, but they get exposure. I think that's what made the talent of today mediocre."

He does like a few current celebrities, "Nicole Kidman I like, because she's tall, slim and sexy. Most female celebrities are short like Madonna, Mariah Carey, you name it. They're petite. It's an advantage to be small because they become a better dancer but to me, Nicole Kidman, long legs is sexy on a girl. Also I like her face, Taylor Swift, she's like a young flower. Beautiful expressions, I love her face. I like Michelle Williams also, she's a beauty."

Galella is enjoying his life now, going through his files—if you've see the entertaining documentary about Galella, Smash His Camera (streaming on Netflix), you'll now that he has tons of photographs. One of his favorite photographs is of Sophia Loren in 1965. "She was at the Dr. Zhivago's premiere, had hands to her eyes, probably talking to Omar Sharif, saying to Omar, 'I thought the Italians had bigger eyes but now I think the Egyptians do.' And at that time she had big breasts popping out of her dress, so it was great." 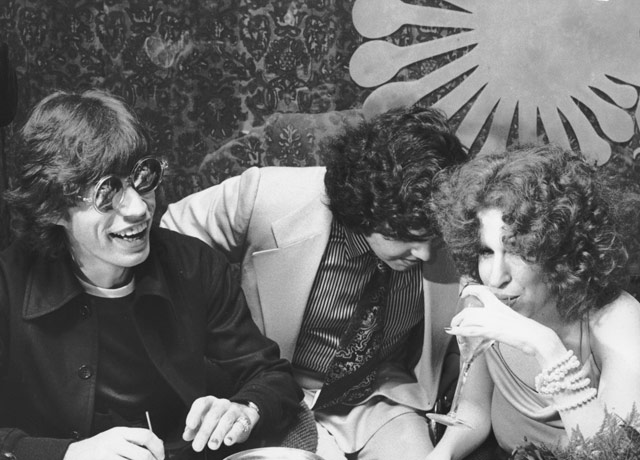 With the new book, Galella is thrilled he could share previously unpublished pictures, "I've got a beautiful shot on the cover of Mick Jagger with his mouth open through the glass window of a limosine at the Limelight," he enthused. "You see, Jackie was my favorite subject in New York, but male-wise it was Mick Jagger. He was my favorite shooting him, he was great because he always gave me great lines. Like one of them Lisa Robinson asked, 'What's your relationship to the press?' and he said 'Well, when I'm in New York, I gotta look out for Ron Galella.'" 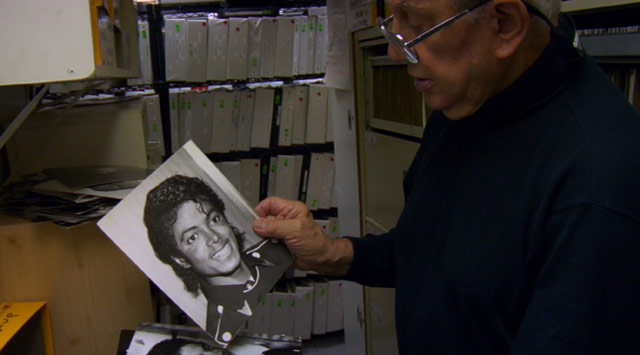 "It's like harvest time," he said, while detailing how he and his staff are working on more books. "I never knew my pictures could end up in fine art galleries. And now the hotel is having a room for me, a whole suite… I was fortunate to have a career doing what I love, doing photography, photographing the rich and famous in the greatest city in the world."