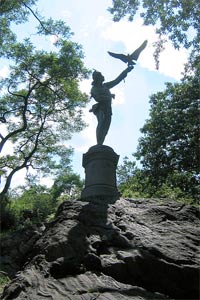 There are many fun events today, like Ecofest at Lincoln Center and Atlantic Antic in Brooklyn, but for those interested in our fine feathered friends, we recommend you head to Central Park to check out the Parks Department's Falconry Extravaganza with the Urban Park Rangers.

The Urban Parks Rangers are bringing a number of falcon species, such as the Saw-whet Owl, Screech Owl, Eurasian Kestrel, Peregrine Falcon, Barn Owl, Turkey Vulture, Harris Hawk, and Adrian Augur Buzzard. The event, in the East Meadow, starts at noon and ends at 4PM; plus at 2PM, there will be a falconry fight demonstration, so perhaps you shouldn't bring small dogs.

And in other bird news, the Parks Department announced that a falcon, who was found in Midtown earlier this year (we think it's the baby falcon found in Midtown East in June) was released into the wild on Wednesday. 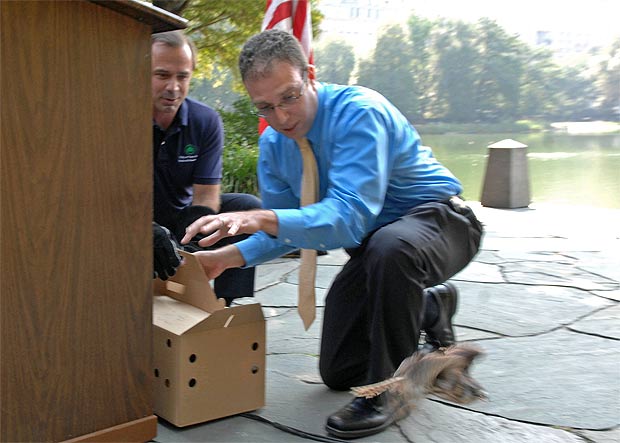 The Parks Department named the kestrel "Kate," and Parks Commissioner Adrian Benepe said, "Today is a happy day for Kate the kestrel who was released into the wilds of Central Park near the Harlem Meer...She was taken care of by wildlife rehabilitator Bobby Horvath until she was ready to be released. She appears to be in excellent health and is quite energetic; she burst out of the cardboard box as we were releasing her."