Television is coming back to life, with several shows (mainly on CBS) returning to the air this week with post-writers strike episodes. Amongst them, the comically inaccurate CSI: NY returns (Wednesday, 10:00 p.m., WCBS 2), with an investigation of a dead assassin found in a warehouse, no doubt filmed in someplace like Culver City.

While it does shoot some scenes here, CSI:NY mostly films on a studio back lot or in downtown LA. Since it tends to be completely ridiculous, CSI:NY's only merit might be in how absurd they can get with faking things. One of the best--or worst?--examples is this scene (video, above) of the Times Square subway station. It includes a painfully obvious fake set (complete with a black-on-yellow 3 train and red MTA logo), stock footage, scenes from the Money Train, and some filming in a Los Angeles Metro tunnel. This is what makes CSI:NY one of the funniest shows on television. Wait, isn't it supposed to be a drama? 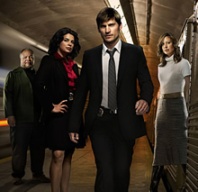 If you want a show about the NYPD that films here and only engages in the forgivable crime of passing one IRT station off as another, you should be watching New Amsterdam (Monday, 9:00 p.m., WNYW 5). This mid-season replacement (sort of Angel meets Law & Order: CI) is one of the better shows on TV now.

And finally, a show where nobody is pretending to be New York--Battlestar Galactica (Friday, 10:00 p.m., Sci Fi). The sci-fi show begins its fourth and final season and finally exorcises memories of the camp Lorne Greene version.

#Battelstar Galactica
#cbs
#CSI:NY
#fox
#new amsterdam
#sci-fi
#television
#tv
Do you know the scoop? Comment below or Send us a Tip