Extra Place's Past and Future 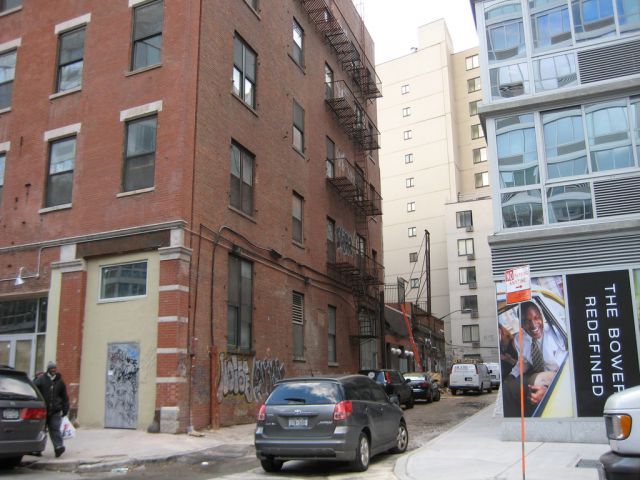 Extra Place is a small East Village street, spanning only 30 feet wide and about 120 feet long, and The NY Times is taking a closer look at the mostly unknown nook of New York that remains invisible to many passerby, and has no street sign to distinguish it. The small street "runs north from First Street — without making it to Second Street — between the Bowery and Second Avenue" (map).

While condo developers (who want to repave it and "create a cleaner passageway to the shops and boutiques that are expected to open in the new buildings"), the community board and the street's owners (the Department of Housing Preservation and Development) hash out the future plans for the now public space, it's a good time to look back at it's past.

Forgotten-NY documents the music history of the street--where The Ramones were photographed in the late 70s (unsurprising since CBGB's back door opened up on to it). Their manager Danny Fields told the Times that “It was filled with junk, shreds of clothes and pieces of barrels, posters, leaves, ropes.” Meanwhile, Vanishing New York goes even further back pointing to a New Yorker piece on the Place circa 1952. "Back then, the alley housed a garage, a metalworking shop, and an old guy who fondly recalled the speakeasy that used to be there in the '20s." What would you like to see Extra Place become?

#avalon
#development
#east village
#extra place
#history
Do you know the scoop? Comment below or Send us a Tip
A new Gothamist is coming! We’ve moved comments over to our beta site. Click here to join the conversation and get a preview of our new website.