When the #normcore trend broke wide open, we here at Gothamist tried our best to unpack the whole thing for you. Our takeaway was that normcore isn't a thing. You clicked on it. It's more or less like any fashion trend—insofar as any fashion must attain a certain artificial permanence before it can be labeled a trend—with the sole exception that #normcore is so precisely ambiguous that everything that is #normcore is not and everything that is not, probably is. See: Ben Affleck. Dammit, Vox. 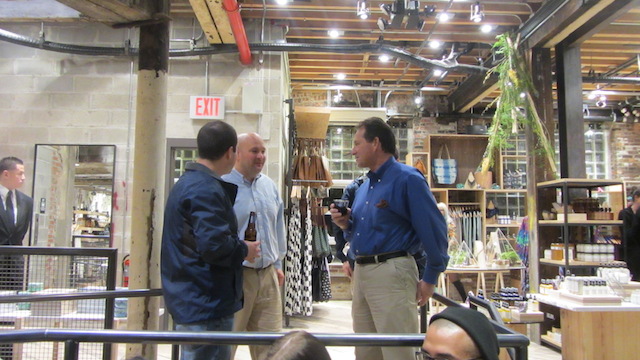 Everyone weighed in. Notably, Vice doesn't give a shit, trolls grad students in the first paragraph, cites an Arcade Fire song and theorizes that #normcore it is just a very good meme. But ultimately they can't resist the call of Marshall's and the essayist postulates that #normcore is uncomfortably, probably, about class and something something hipsters. Fair enough. We tried to stay above the fray [Ed: Nice pun, Marc]. Anyways, everybody knows that The Suburbs track "Rococo" is the most #normcore Arcade Fire song.

I also read somewhere that It Is Always About Class. Those tapered Nike sweatpants are gonna set you back like $60. Russell shills 'em for $17 (they are very comfortable and fitted with elastic-cuffed legs that will accentuate your cankles). We thought it could all end there, but Vox.com had to come in and muddy the waters.

What is Vox.com?
Okay, deep breath. Vox.com is the latest news and politics website from the Washington Post's WonkBlog creator Ezra Klein. They have weighed in on the controversial fashion trend. For those who like their news served dry, straight-up, and blandly condescending like that-guy-who-follows-Politics-Very-Closely, look no further.

What do they think about all this normcore stuff?
Prince William is normcore? Fat chance—he's royalty! Steve Jobs? Yeah right! He was a greedy asshole whose greatest lasting legacy was the de-skilling of personal computing. This is all hand-wringing, of course. What the people want is the patented Vox spin, and boy did they get it.

The big reveal is that normcore has been around forever! Since, at least, the creation of ready-to-wear clothing in the 1920s. "This trope of rich people dressing below their income has appeared in popular culture for decades," as the article states, but presents one if it's biggest problems in "that, if done correctly, it's almost impossible to tell if someone is wearing normcore as a fashion statement versus someone wearing the clothing in their closet."

What is the point of this website?
The most striking revelation of all is that Vox is the very first normcore website. A kind of neatly-packaged computer algorithm for cranking out content that explains things to your dad. With articles like "Everything you need to know about gerrymandering," "Nuclear fusion, explained," and "It's Librarian Day — here's what you need to know," Vox has successfully synthesized into some kind of radically uninteresting Buzzfeed spinoff complete with less provocative Upworthy headlines: "Vox: Making Your News Boring, More and Again."

#bitterness
#citations
#i hate myself
#news
#normcore
#politics
#regret
#vox media
Do you know the scoop? Comment below or Send us a Tip