Expert Claims the Montauk Monster is a Raccoon 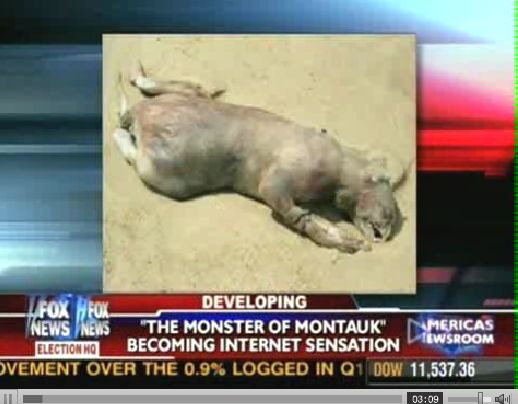 Yesterday Gawker posted a photo of what quickly became referred to as "the Montauk Monster." Lizzie Grubman jokes were made, spines shivered, conspiracy theorists pondered (the Montauk Project, anyone?), a new internet superstar was born, and most came to the conclusion that the thing that washed up near the Surfside Inn was a bloated turtle without its shell. Or a monster.

Now Fox News has brought in the experts (the full clip is after the jump). Animal Planet's Jeff Corwin, angered by a Red Sox loss and the stupidity of humans, says the public's fascination with the creature is unwarranted; what we thought was a beak are really teeth, he says, and clearly what we are looking at here is a raccoon. Or maybe a dog? But definitely not a monster!

As for the monster "raccoon," no one seems to know where it is now; NYMag says it was carted off by an old man declaring he would mount it to his wall. Meanwhile, PlumTV promises an interview with the photographer, Jenna Hewitt, tomorrow.