‘Beyond The Streets,’ an exhibition of graffiti and street art, is opening to the public on Friday in Brooklyn. We dropped by the 25 Kent Avenue space for a preview earlier this week, where over a hundred artists have their work on display. The pieces are spread out over two-floors in the soon-to-be-opened commercial building on the border of Williamsburg and Greenpoint.

The exhibition’s lead curator is street art historian Roger Gastman, and his co-curators include Evan Pricco, editor of Juxtapoz Magazine; David “Chino” Villorente, a New York City graffiti veteran; and Sacha Jenkins, a filmmaker and musician. As a teenager, Gastman began tagging in Bethesda, Maryland, using “Clear,” as his signature. He was “doing things he shouldn’t have been doing,” at that age, but eventually his connection to this art scene opened up a new world.

In the early ‘90s, Gastman traded photographs and stories with contemporaries across the country, and in 2001 released his first book, Free Agents: A History of Washington, DC Graffiti. He has since curated exhibitions across the country, co-authored numerous books on street art, and co-produced films like Banksy’s Exit Through the Gift Shop.

Beyond The Streets first opened in Los Angeles last year, but this year Gastman brought it to New York with a new lineup of artists. “It’s a lifetime of work. It’s people I’ve admired my whole life, and people I grew up hanging out, and going to high-school with,” he told Gothamist.

Gastman’s closest collaborators in this exhibition come from a diverse background, but are all connected by the common thread of street art. An early subway tagger, David “Chino” Villorente, first immersed himself in the scene after seeing his favorite pop culture figures painted on the handball courts.

“There was no Internet. There were no books or magazines about the culture. So you kind of really had to do legwork to figure out, and do your share of research,” Villorente said. “It was done under the cloak of darkness.”

Villorente started sneaking out during his freshman year of high school, and tagged trains across the city between 1972 and 1988. He calls this period a “creative renaissance,” which was led by teenagers who weren’t old enough to vote, or drink, but had a “stranglehold” on most of the MTA’s exterior real estate. 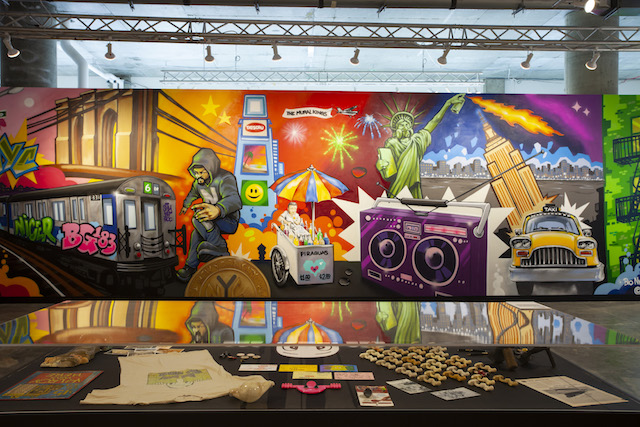 Jenkins, who recently directed the Wu-Tang documentary series Of Mics and Men, believes that graffiti and street-art haven’t changed much over the years. What has changed, according to Jenkins, is how it has come to be recognized as a legitimate art form.

“I think it’s changed in ways that there are cameras everywhere, so illegal graffiti is really a difficult enterprise. But graffiti is more a language, and you have to be fluent in the language to really understand, and appreciate it," Jenkins said.

Among the oldest and earliest artists on display were a group of subway taggers from Washington Heights. Among them, Jose Colon, a.k.a. JEC Star, was seen carrying around a worn out copy of “The History of American Graffiti,” a book co-authored by Gastman in 2011.

Colon was getting the book signed by his contemporaries who featured in its pages, alongside him. He started tagging trains in 1968, after deciding that neither sports nor joining a gang was right for him. Every week, he was at the 207th Street Train Yard Facility between 11 p.m. and 4 a.m. with his group, tagging trains with signs, symbols, and words.

“We were teenagers, and people would yell at us in the train, the police would chase us, and sometimes we’d be embarrassed. We’d see something brand new, and mess it up,” Colon said. “I still do graffiti. I’m 63 years old. I still always have a marker. I go to McDonalds, into the bathroom, and I write my name in there.”

Shepard Fairey, whose work on display was a retrospective called, “Facing The Giant - Three Decades of Dissent,” included new and reworked, prints of his ubiquitous “Obey” poster. He also displayed two new paintings, including “Fanning the Flames.” Fairey, who began traveling to New York City in the early ‘90s after his best friend transferred to New York University, credits the city as his foundational playground.

“I’ve been arrested a few times, it was always unpleasant," he told Gothamist. "But New York to me, was my proving ground, and I feel like having the experiences, doing things here, gave me the tools to do my art wherever in the word."

Beyond The Streets opens June 21st at 25 Kent Avenue in Brooklyn. Hours: Wednesday through Sunday, 11 a.m. to 8 p.m. Tickets are $25; beyondthestreets.com

#beyond the streets
#graffiti
#street art
#original
Do you know the scoop? Comment below or Send us a Tip