The NYPD is out to nab Banksy in the midst of his monthlong New York residency, with pros from their special Vandal Squad working to take the elusive street artist down. Yesterday we caught up with Steve Mona, who worked with the Vandal Squad for 18 years before he retired in 2006; he's now a participant in the Write of Passage program, a six-week Red Bull Studios-sponsored series focusing on the impact of Graffiti on global culture. During our chat he sounded off on Banksy, graffiti art's legal and artistic connotations and what the world might be like with a Mayor de Blasio.

The Vandal Squad has been trying to track down graffiti artists for how many years? The unit in one shape or another has been around since the ‘80s, but the current lineup, the way it’s set up right now has probably only been around since 2004. But the unit has existed since about 1981, they just revamped it in 2004, and not for the better I don’t think. But that’s another story.

Cops are investigating all the Banksy works during his residency this month, and the Daily News’s sources say they haven’t heard anyone complain about any of the works. None of the owners of the spaces have complained.
Unless he’s done something on city property or one of the owners files a complaint, then there hasn’t been a crime committed. Because graffiti is an art form, what makes it a crime is whether the person had permission to do it to the property that they did it to. So if I walk up to your house and break your window because you said to me, ‘Hey Steve, break my window,’ I can’t be arrested for criminal mischief because you gave me permission to break your window, it’s the same with graffiti it’s no different. As long as no owner complains or
Banksy does [something to] a city property, which the mayor does have direct control over, then there’s no crime. 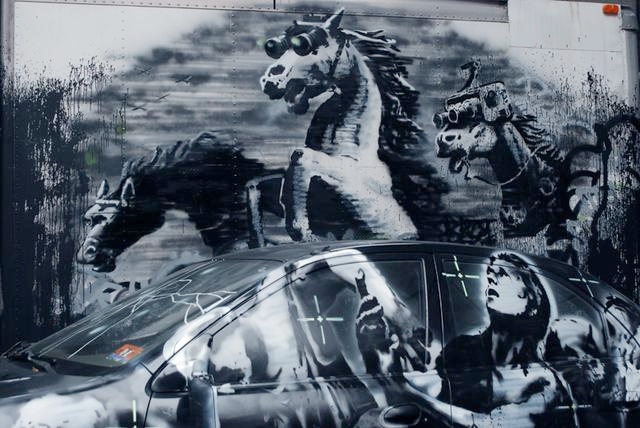 So then why is the NYPD targeting Banksy if he hasn’t committed a crime? I guess the Mayor got on TV and put the cart before the horse and, said, well listen, the guy is getting notoriety, he’s getting his pictures on websites. So Bloomberg kind of put the cart before the horse, and with the police department, they’re not going to tell the Mayor’s office, "Well listen, we don’t have a complaint, so we can’t use these resources." Now I didn't see this one, and I’m not a hundred percent sure, but there was one, the 9/11 one, near the Brooklyn Bridge. I believe that is city property, so there’s your complaint.

I think that’s been buffed since. Yeah, it has been. It all comes down to permission, and I think that’s where people lose the focus, on both sides of the equation. If Michelangelo had not had permission to do the Sistine Chapel, he would be a vandal, not an artist.

Right, so it doesn’t matter if it’s just some kid who tagged a building with his own tag or if Banksy does a silhouette of a chestnut or something. Right, it all comes down to permission. Did the owner give permission, or in the absence of permission, does the owner care that it’s there. If the owner is not willing to file a complaint, the City can’t on behalf of the owner since it’s not the City’s property. What Banksy’s issue is right now is that Brooklyn Bridge thing, which looks to me like City property. That’s what the Mayor controls. He doesn’t control Joe Blow landlord on 245th Street in the Bronx, which may have a Banksy tag on it, or whatever they’re called.

So what would catching Banksy mean for the Vandal Squad? It breaks down to what they arrest him for. So let’s assume it’s this one city-owned piece of property. If it cost the City more than $250 to remove that piece, then he’s committed a felony. That’s what the law says. I’m sure that having the city worker or two standing there trying to get this 9/11 mural off that bridge or whatever it was, I’m sure it cost the city more than $250, so he’s committed a felony. He could be arrested for a felony, but they have to catch him first.

What do you think of Banksy’s work? I find it interesting. I think it’s clever. I think that what you’re seeing, the kickback against him here, where people have been going over it, it’s really interesting in the graffiti subculture, what he’s done here. Everybody aspires to be a Banksy, but once you become a Banksy, you then catch the ire of all the guys who are still trying, so you become a target, you’re a sellout, and all this other stuff. Nobody gets into any sort of artistic endeavor or business endeavor hoping they can break even or hoping they can barely feed themselves. Everyone wants to be successful, everybody wants to make money. So I find it interesting that he’s come here and he’s gotten all these local writers targeting his stuff because he’s marketing himself in a way that not many people can in that subculture. 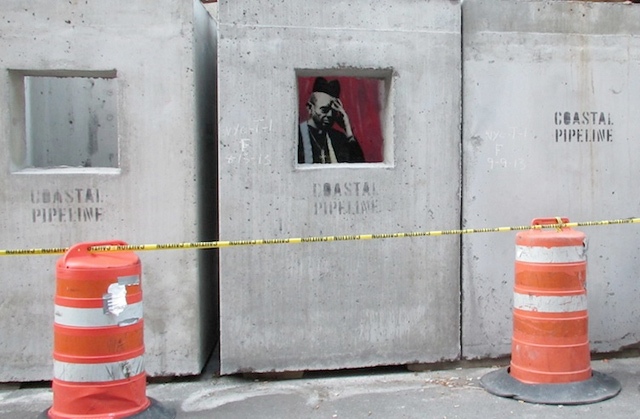 Have you grown to appreciate street art over the years? I’ve always appreciated graffiti as an art form. The only difference is that now that I’m no longer being paid by the NYPD I can say that I appreciate it as an art form. I own several graffiti art pieces on canvas in my home; I do consider it to be an art form...I’m not an art critic, I’m a cop, I know what a crime is. [But] it’s an amazing art form, and to deny that or to deny that it’s not a part of the fabric of New York is silly.

Do you think New York will descend back into the crazy Bad Old Days under a Mayor de Blasio? I am extremely concerned about de Blasio. Listen, I’m not a Bloomberg fan by any stretch, but I’m very concerned. I live in a neighborhood that I could not have lived in when I first became a police officer, and so I’m a little concerned. I’ve seen even the last couple of months, just an uptick in stuff around the neighborhood. I actually grabbed somebody who committed a robbery literally right in front of me a few weeks ago.

Do you think some of that is because the cops and de Blasio will have trouble getting along, or is it because his policies will make it harder to be tough on crime? I think it’s a little bit of both; we focus on Stop and Frisk, and it’s not even called that in the police department, it’s Stop, Question, and Frisk. Nobody’s really taken the time to look at what [the policy] is supposed to be, and what the police department’s turned it into. It’s not supposed to be what it’s turned into.