Everything You Never Wanted To Know About The Return Of Girls 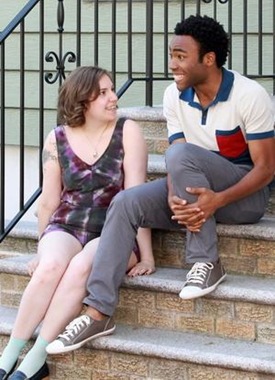 In the second episode of Girls' season two, there's one scene in which it seems clear that Lena Dunham, speaking through her character Hannah Horvath, is having a conversation with her critics. "I don't live in a world with [racial] divisions like that," she declares, in a not-so-subtle reference to the backlash against the show's first season. Some viewers criticized Dunham for excluding minorities from her twenty-something version of New York City, and in season two—which starts this Sunday—she finally gets to respond on screen, almost immediately. Not even three minutes into the season two opener, Dunham's character is naked and straddling Donald Glover, a black actor.

If season one started setting up the foundation of Hannah Horvath's world, season two is breaking it all apart. Without giving much away, here are some observations from the first few episodes. I watched these about a week ago with a few girlfriends and more than a few glasses of whiskey—these are some of the thoughts that remain:

#girls
#HBO
#Lena Dunham
#premier
#primer
#season 2
#tv
#original
Do you know the scoop? Comment below or Send us a Tip