Everything You Need To Know About Governors Island 2019

Governors Island has opened for the season! The delightful 172-acre oasis in New York Harbor will be open through October 31st, and every new season brings fresh additions to programming, extended hours, and more offerings—below you'll find the basics, along with what's new this year. (And click through for a look at the Island on Monday, before all the people showed up...)

We'll be updating this guide as Governors Island release more information about this season's programming (including the possible return of late night movies, and more).

Governors Island is open seven days a week, Monday-Friday 10 a.m. to 6 p.m. and Saturday-Sunday 10 a.m. to 7 p.m. Note: there are some more extended hours this season. They will be open until 10 p.m. every Friday and Saturday between Memorial Day weekend and Labor Day weekend, and will also be announcing more evening programming for late nights later this month.

The ferries run frequently, and from different locations. You can check the schedule for the ferry closest to you on the Governors Island website. A new ferry is arriving in June, which will increase service on the weekends. (Ferries will be free for all visitors opening week, May 1st to 5th.) 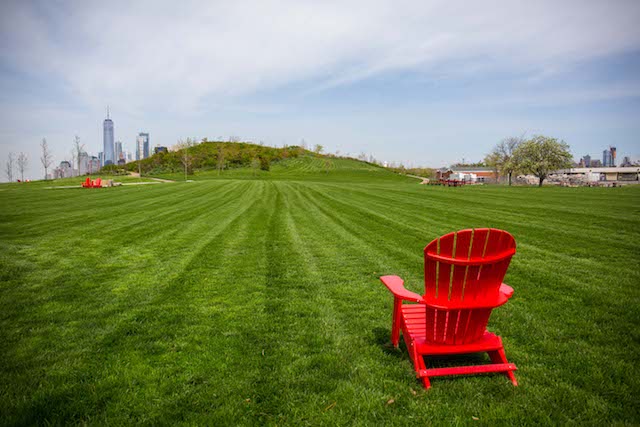 There are several new food vendors this season, including a new beer garden from Three's Brewing, as well as the Island's first ever pizza vendor, Neapolitan Express. Another newcomer is Perros Y Vainas, which will serve up "loaded Venezuelan hot dogs and mixed drinks," and Makina Café, "which will serve modern Ethiopian food with vegan and vegetarian options." There will also be desserts and coffee from Melt Bakery, Joe Coffee and People’s Pops.

There are also two waterfront restaurants—as usual you can get the city's best lobster roll at Island Oyster, and Taco Vista will return, as well. There's also Little Eva’s garden & grill and Fauzia’s Heavenly Delights serving up Caribbean food.

We flew a drone over Governors Island on Monday. (Jake Dobkin / Gothamist)

The Island's 2018 public art commission, Jacob Hashimoto's Never Comes Tomorrow in the Liggett archway, has been extended. In addition, they'll be announcing a new commission for the season within the next month. Stay tuned for that.

As usual, there will also be art exhibitions. "We are hosting free programs in the historic houses of Nolan Park and Colonels Row, which used to be home to military officers and their families," a spokesperson told Gothamist. "This year we have 30 organizations producing free exhibitions in the houses, including new exhibitions from Pioneer Works, the Museum of Contemporary African Diasporan Arts (MoCADA), the American Indian Community House, and the School of Visual Arts. We also have new exhibitions from returning organizations including the Climate Museum, 4heads, New York City Audubon and more."

Everything will kick off with a new exhibit from the New Art Dealers Alliance, "which will open NADA House for Frieze week this Thursday (May 2nd), featuring over 45 artists. For opening weekend, they will be hosting free performances including by ambient instrumentalist Laraaji."

Collective Retreats will reopen their campgrounds, this year also offering meals, drinks and activities to the public (for a price), as well as private boat rides for guests (also for an additional fee).

The popular Jazz Age Lawn Party will return (June 15-16 and August 24-25), as will the Vendy Awards. There will also be a new event, ShinDIG, which is a community volunteer event and will serve as a kick-off this weekend. Porch Stomp goes down on June 23rd, the New York City Poetry Festival takes place July 27th and 28th, and NYC's Unicycle Festival arrives on August 31st.

And in September, the Longines Global Champions Tour, "one of the world’s most exciting and competitive equestrian series," will be hosted on the Island. There are so many events, that you'll want to check out their website for more. 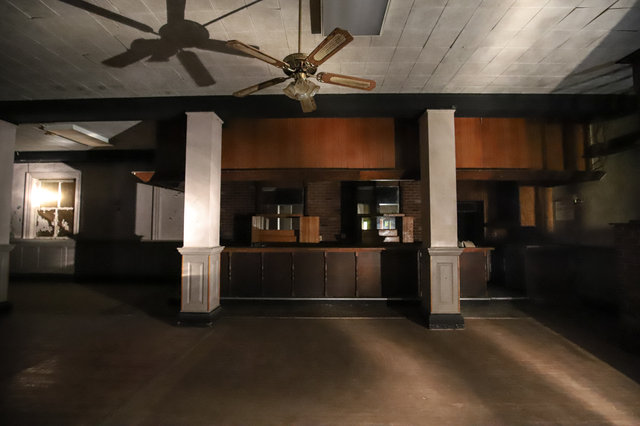 The bar inside the South Battery Building. (Sai Mokhtari / Gothamist)

This island is full of history, and there will be free walking tours available Wednesdays through Sundays from their visitor center for those who want to learn more. The National Park Service will also offer free tours of the Governors Island National Monument, which includes Fort Jay and Castle Williams. And they'll also be launching a new self-guided walking tour with Urban Archive sometime around Memorial Day weekend.

For more, check out our look inside the abandoned buildings on the Island, and learn more about the history of these structures.