Everything You Ever Wanted To Know About NYC's Iconic Park Benches 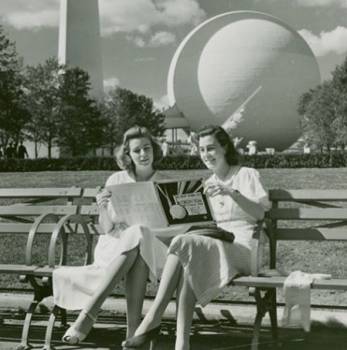 In the 1930s, Robert Moses designed one of the most iconic NYC Parks Department benches, which you can still find around the city today. You'll be able to spot the Moses bench, which is called the World's Fair Bench, by its green color, a touch of Victorian style, and round armrests.

Moses collaborated with Kenneth Lynch on the design in the 1930s, with the purpose of creating a bench that would be used at the 1939 World's Fair. But it was also an ego bench—according to a 1994 article in the NY Times, Moses wanted his mark all over the parks.

When Robert Moses became the Parks Commissioner in 1934, he, too, wanted to put his stamp on the park and called for a new bench. This one was made of cast iron, with an Art Deco flair, but its basic shape harked back to the hoop arms of the turn of the century. About 8,000 were made for the 1939 New York World's Fair—and many are still in the park today.

Moses and Lynch aimed to "maximize comfort" in their efforts, and since the first one was built it has seen only a few slight changes. The Central Park Conservancy tells us that the Moses benches "are primarily used in more formal (as opposed to naturalistic) landscapes, such as the Great Lawn oval and some Park entrances." 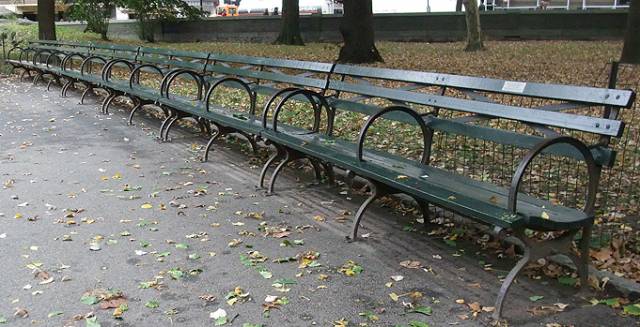 But they aren't the only bench in town—in Central Park, there are four main types of benches: the Central Park settee, the World’s Fair, wood-and-concrete, and rustic benches. (All of them are better than those new silver monstrosities.)

"Most of the benches used in the Park are based on historic designs," the CPC tells us. "When new benches are designed (primarily in playgrounds), considerations include comfort, accessibility, sustainability, and how the materials and design complement the playground design and the goal of integrating the playground with the surrounding landscape."

There are also a few commemorative and sculptural benches, like the Andrew Haswell Green bench near the Fort Fish site in the northern end of the Park, and the Charles B. Stover Bench in Shakespeare Garden. The one is Shakespeare Garden also goes by the name "the Whisper Bench," and just like the Whisper Wall in Grand Central, you can whisper into one end, and the sound travels to the other end. 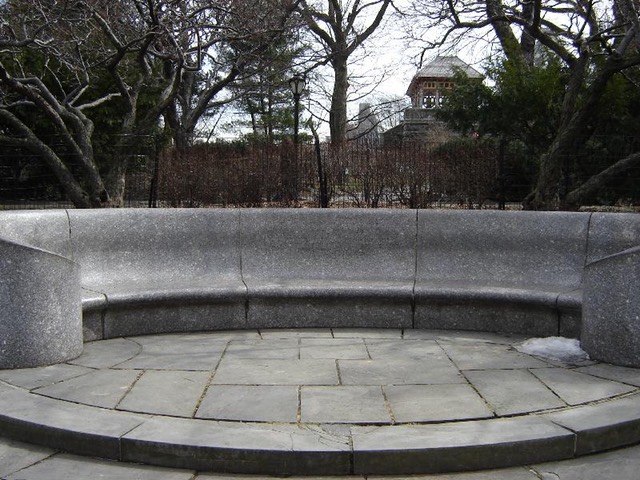 The wood-and-concrete and World’s Fair benches were developed in 1929 and 1939, respectively, "and became standards throughout NYC parks," according to the CPC. But they refused to pick a favorite when we asked what they considered to be the most iconic bench in Central Park.

"We don’t define any of them as more iconic than any of the others," a rep told us, "but the Central Park settee and rustic benches were original to the Park’s inception in the mid-19th century. They were designed to support the intended character of the landscape as a rural retreat. The simplistic design of the settee was meant to be as inconspicuous as possible in the landscape, and the rustic benches — artistically crafted from unmilled logs and branches — were designed to complement the character of the Park’s more picturesque landscapes." 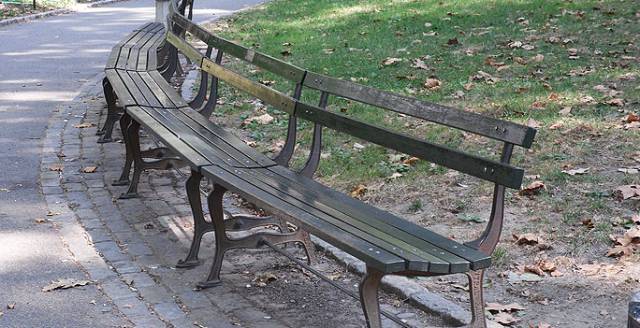 Benches have been part of Central Park since it was created, and today it's home to 9,000 of them. When one falls into disrepair, it's replaced—"bench slats are replaced on an ongoing basis as needed," we were told—but if it's just a matter of chipped paint, you can help. The CPC recently started a new volunteer program to help repaint Central Park’s benches. (You can sign up here.) As for the new benches, they are manufactured by Kenneth Lynch & Sons or in-house craftspersons. 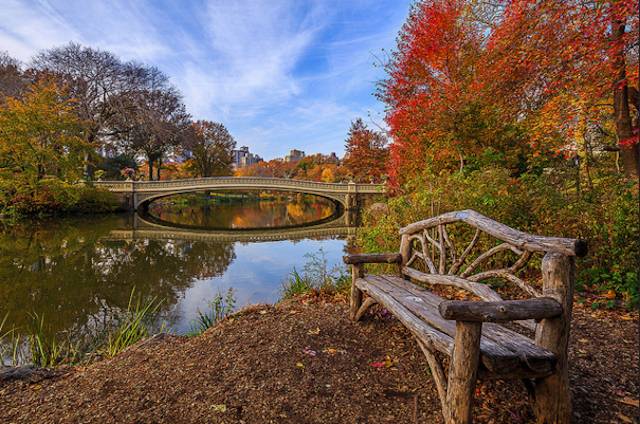 You may not be able to create your own bench like Moses, but you can put your mark on one just the same—with the exception of rustic benches, they may be endowed for $10,000. Groups can endow a bench through BenchMark, an online fundraising tool (or email benches@centralparknyc.org or call 212.310.6617).