Eustace Tilley Contest Back On! 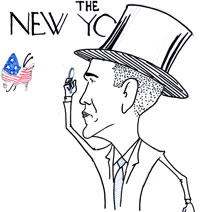 Looking for something to do over your holiday break? Bust out the thinking caps and put pen to paper for this year's Eustace Tilley contest! Last year saw an MTA subway map Tilley, and a Mr. Burns-Tilley; so far this year's entrants aren't on full display over at Flickr, but the mag does offer up this Barack Obama version of the iconic dandy.

The New Yorker also reminds that "Eustace Tilley appeared on our first cover, in 1925, and has returned for nearly every anniversary issue since," (a little more history can be found here) and they ask that you take a turn at creating your own version. The deadline is January 15, 2009, and the winner will be featured in a slide show curated by the magazine's art editor, Françoise Mouly. Here's a look at some of last year's finalists.