Eugene Mirman Stands Up Against His Neighbors 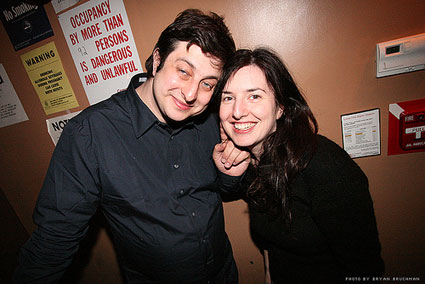 Today, in the wake of the CB6 meeting that took place last night, Eugene Mirman tells us what he really thinks of his nagging neighbors; sentiments that are surely being echoed from his speech last night. Put in some earplugs and read carefully Crow & Co.

I feel bad that some people are genuinely bothered by the noise outside the bar — and Union Hall has done a lot to remedy the situation.

I don’t live on Union Street, but I live around the corner, about as close as John “I Called 911 Because I Thought Their Assembly Permit Was Expired” Crow.

Many of the people who spoke at the meeting were rude, entitled, self-righteous and over dramatic — though one woman seemed very nice and reasonable, and I felt particularly bad for her. Two people claimed the noise was killing them — not figuratively — but literally. Maybe Brooklyn isn’t the best place for someone who has a life-threatening allergy to bar noise?

Also, Union Hall does not have people shouting till 4 in the morning 7 nights a week. Sundays and week days, the bar often closes by 2 and is quiet for the last several hours. I also live above a restaurant/bar. It moved in after me. It can be very loud, but before I’d try to shut a business down, I’d maybe move — because I’m not a crazy, self-righteous asshole who believes the world revolves around me — which is odd, because I’m famous and should feel that way.

Mirman was filming at the meeting last night, which he tells us is for "a documentary with Gigantic Pictures on me going back to Russia for the first time since I immigrated here. We wanted to get footage of democracy in action. Which we got."

Photo of Eugene Mirman and Alina Simone at Union Hall by Bryan Bruchman.