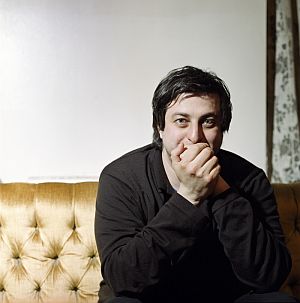 The bio on Eugene Mirman's website poses the question "Who or what is Eugene Mirman?" and answers, "In 1978, at the age of four, Eugene Mirman emigrated from Russia to seek a better life in America. It fucking worked." Of course, you've probably been familiar with Mirman at least as far back as the summer of '06 when he killed at Gothamist's Laughable Hype show. For any other entertainer, that magical night would have been a career high water mark never to be attained again, but Mirman has soldiered on with loads of stand-up gigs and TV appearances, including a recurring role on the HBO series "Flight of The Concords." But it's not all about cracking wise and getting kicks with his goodtime buddies. Back from covering the New Hampshire primaries for 23/6, Mirman will kick his political agitation up a notch by joining a big comedy fundraiser for Barack Obama on January 29th at The Knitting Factory. Here's the fill list of performers, which includes Mirman's fellow Laughable Hype veteran Aziz Ansari. Guess they'll have some reminiscing to do!

Is this the first election season where you’ve supported one of the candidates? Sort of. This is the first time I’ve supported someone during the primaries, which carries a lot of weight with people who were already going to vote for Obama. In 4th grade I campaigned for Reagan (it worked), and in 2004 I did a bunch of fundraisers for John Kerry (Sorry, America, I failed). Basically, after Bush beat Al Gore and tried to ruin America, I decided to be more politically involved. But not too much! I want to remain “cool.”

Who’s your least favorite Democratic nominee and why? Hillary? I went to a rally of hers in New Hampshire and it was kind of annoying and uninspiring. Though she’s working hard on re-branding herself, so maybe in a month we’ll think we’ve loved her all along?

I’m sure Hillary is smart and would do a pretty good job with policy. I think the problem with her is that when she’s saying what she believes deep down, she feels like she’s lying. But that might be because she’s had to develop a harsh exterior to get to where she has. That’s what Charles Bronson did. However, at least it’s better than Bush, who I’m pretty sure is actually trying to hatch an evil plan. I bet his last words as president will be, “Suckers!” and then he’ll blow up the Statue of Liberty and disappear in a submarine.

Let’s play word association! Say the first thing that comes into your head when you see these words: President Romney. I am sneaky plastic robot! I puke business analogies on America! Plus my religion is even less plausible than yours!

President McCain. Hawkish, but probably alright. He promised to help save the earth.

President Mirman. Oh shit — for a different reason… You left off Edwards. He’d be pretty good too. Sadly, he might Nader the primaries. Unless he becomes president, then it will be a truly American tale.

Why Obama? I’d like to apologize in advance for answering this question sincerely. I want two things from a president: 1) an effective, visionary leader with the ability to make America and the world better (i.e. better schools, less enemies, more cash to buy health care and whiskey, etc.) and 2) someone who embodies my ideals (which are great ideals, trust me), and is a gifted, intelligent speaker, who doesn’t seem sneaky and you’re not embarrassed or infuriated when they’re on television.

To me, Obama is those things — he’s smart, inspiring, far less divisive, he compromises to get things done. His opponents (in Illinois) describe him as “reasonable.” I like that. Though he’s passionate, he doesn’t seem ideologically dogmatic, but more a judicious problem solver. He’s fiscally responsible, socially progressive, and a moderate of sorts. Plus, sometimes, he speaks with such force he makes reporters cry. He’s the most inspiring candidate in years. He’s spun as not having enough experience, but he’s actually worked for two decades in public service – regardless, I believe experience is something that is easier gained than wisdom. (George W. Bush, Dick Cheney and Ted Nugent being the proof of that). For me, voting for Obama feels like I’m voting for someone, not against another. Ultimately, I guess I like and believe him more than the rest. Maybe he studied with Stanislavski? And Hillary studied kabuki?

Were you on hand in New Hampshire to see Hillary cry? No. I actually didn’t hear about it till later.

Do you agree with Maureen Dowd’s take on Hillary’s New Hampshire misting, that “there was a whiff of Nixonian self-pity about her choking up. What was moving her so deeply was her recognition that the country was failing to grasp how much it needs her. In a weirdly narcissistic way, she was crying for us. But it was grimly typical of her that what finally made her break down was the prospect of losing.”? I don’t really know. I’m sure it’s very stressful to run for president and I bet it makes all sorts of people cry, except Mitt Romney, who has no tear ducts.

What do you say to people who think limousine liberal celebrities like you should pay more attention to show business and stay out of politics? Sadly, having to listen to celebrities talk about politics and social issues is people’s punishment for following their relationships in the news and masturbating to the sound of their lives falling apart. Still, I do think if Britney Spears really wanted people to leave her alone, she should start making super long speeches about Ron Paul. Arts and politics have always been mixed, but more importantly, people no longer have to do what I say. I gave up that power when I decided to become human.

Besides the fundraiser and touring, what else is going on with you these days? I’m writing a super funny guide to life called The Will To Whatevs for Harper Collins. I’m going to start working on a documentary of returning to Russia for the first time since I immigrated to America. And I’ve been making videos for 236.com. Like this one.

Still residing in New York? Yes. I live in Park Slope, which I love.

Pros/Cons? It probably depends on your personality, but I love all the wealthy babies and self-righteous people. Plus it’s a little quieter than Manhattan, but there’s still a park nearby, good restaurants and charming bars and pretty homes.

What’s the most noteworthy fan interaction you’ve had so far? Someone once made me a coloring book illustrating jokes of mine. Is that what you mean?

What are some of your favorite restaurants in New York? Al Di La, Blue Ribbon, Casa Mono.

What about a favorite bar? Union Hall is great. It’s got a very warm vibe. (I’m sorry for using the word vibe, but it is the right word). I like the Magician a lot. And Commonwealth, which has a great Juke Box.

If you could change one thing about New York, what would it be? I would make everyone carry a sword.

If you could change one thing about yourself, what would it be? Probably the same as anybody else — develop an immunity to the HIV virus.

Who’s the funniest comedian not enough people are aware of right now? Is it okay if I list three? I really like Larry Murphy, Greg Johnson and Kumail Nanjiani. They’re wonderful. I’d also add John Mulaney, but I think everyone knows about him now.

If for some reason you couldn’t live in New York, where would you like to reside? Western Mass. or maybe Seattle or Cape Cod or Austin.

Please share a bizarre or otherwise memorable experience you’ve had or witnessed in public in New York City. I once saw a lady cleaning her bottom with a sock by the Atlantic subway station. It was upsetting.

Please name your pick for the three funniest movies ever. Borat, The Jerk, and something by Woody Allen or Bill Murray.