Etiquette Tips From DJs, For When You REALLY Want To Hear That Annoying Song 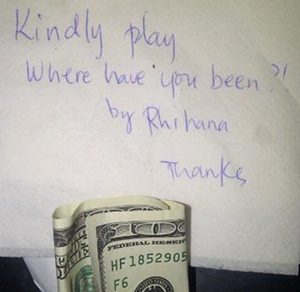 We, as New Yorkers, may (think we) know all about etiquette when it comes to our city, but what about when the sun goes down and we're four cocktails in and just really want to hear that Lady Gaga song? Maybe you've conveniently blacked out the times you were on the dance floor screaming at the DJ to play your song, but it's probably happened, at least once. So, from some of New York's DJs, we offer you some etiquette tips when you find yourself in that situation again.

Eric Feigenbaum, of the band Ego Puppets, deejays at both the Manhattan Inn in Brooklyn, and the Living Room in Manhattan. He tells us:

Is there an etiquette rule when it comes to requesting a song? Yes there is, and it's simple: Just be cool.

Should someone tip if they want you to play something totally absurd or annoying? Insofar as I feel pretty weird about someone tipping me for DJing, I'll probably take your money if it comes with no strings attached (at least partly because I'm assuming you're kind of a tool, which of course isn't always true, but I pretty much always get that man-you've-got-the-wrong-idea feeling whenever someone hands me money in the DJ booth). If, however, you're trying to convince me that I should play some annoying shit that I don't want to play, the price probably starts quite a bit higher than one dollar, or five dollars. I certainly haven't had occasion to sort out a price list, but I'd guess it starts somewhere in the $50 range for medium annoying, and baseline $100 for really annoying. Point being, I really don't wanna play Citizen Cope, because it really sucks, but I'm not so stupid of a business man to turn down what amounts to $300/hr.

What's the best way to request a song (running up to you and shouting, writing it down on a napkin, etc)? Method is pretty unimportant in relation to style.

Should people expect a deejay to play their request? No. You're only one person amongst many. I am also only one person, but I'm the one person who is responsible for guiding the flow of the night. It's my job, and I'll decide how to do it. That being said, if you're cool, and you ask for something cool, I will almost definitely play it at some point.

Next up, Sarah Lewitinn, who you probably know better as Ultragrrrl. She's been behind the 1s and 2s for the better part of the past decade.

Is there an etiquette rule when it comes to requesting a song? NEVER say to the DJ "can you play something we can dance to?" Some DJs get hired for the genre/type of music they spin/select on a computer, not to just stand there and be a human jukebox. If you want the DJ to play something that seems outside of their genre/zone, tell them they're doing a great job and you love the music they're playing and "oh, could you play that new Rihanna song? I promise to take responsibility if it doesn't go over well!" If the DJ doesn't have your song, don't be annoyed or make them feel like shit for being lame. Instead, hand them your phone with the track on it and offer to let them use that.

Should someone tip if they want you to play something totally absurd or annoying? Tipping never hurts, however, I've personally always refused them because I felt like it was rude to take money from someone for DJing a song they requested. I am immediately changing this line of thinking.

What's the best way to request a song (running up to you and shouting, writing it down on a napkin, etc)? The best way to request a song is to write it down and be polite about it. I've had people come up to my CD books/laptop before and ask if they can look through it for a song to request. That's absolutely not okay. I've only allowed it when it was Kate Moss, and then she requested a song that was written about her, so it was cute.

Should people expect a deejay to play their request? I don't show up to your work and tell you how to do your job, don't do that to me.

Brothers Darin and Greg Bresnitz are often found behind the decks at some of the most noteworthy spots and parties in New York, and here's what Darin tells us:

Is there an etiquette rule when it comes to requesting a song? Should you feel the need that you MUST hear a song at that very instant and that the night will be ruined if that song is not heard, please make sure that the song requested is in the genre or vibe that is being played. Asking for Britney when someone is doing a deep house set is not an appropriate request.

Should someone tip if they want you to play something totally absurd or annoying? Absolutely. It's pretty tacky, but if some dude is claiming that he's "djing this shit" as he slips you 20s to play top 40s, take his money and buy a round for your friends.

What's the best way to request a song (running up to you and shouting, writing it down on a napkin, etc)? There really isn't any. When a DJ is in his zone, he usually does not want to be talking to a random person who doesn't trust them to play good music. That being said, a request written on a twenty dollar bill is not the worst way to get your request considered.

Should people expect a deejay to play their request? In short, no. If the person requests an obvious song (i.e. M83's "Midnight City" during the Summer of 2011), the DJ was probably going to play it anyway and the requester can feel that they made a difference in the music being spun. Normally, however, the person should just dance with their friends or just to work on some sneaky finger action and let the DJ do their thing.

What song should just NEVER be requested? (Or what is your most dreaded request?) D.A.N.C.E. by Justice, it's still too soon to bring it back.

So there you have: be nice, don't expect to hear your song, be thankful if you do, and you probably don't need to slide the DJ a ten spot. And one last thing, Feigenbaum tells us you shouldn't expect to get the music turned down either, "unless you happen to be police, or the fire department, or the owner of the club, or Stephen Hawking, then no. And I'm not even really 100% on what my response to Hawking might be."

#deejay
#dj
#etiquette
#requests
Do you know the scoop? Comment below or Send us a Tip