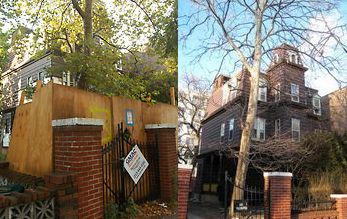 Michel Gondry may have just moved to Orient Avenue in Brooklyn, but certainly not to #59, which was briefly in the limelight when it appeared as Kate Winslet's apartment in his film Eternal Sunshine of the Spotless Mind. Four years after the cameras stopped rolling, The Brooklyn Paper takes a look at the house in its current state--and it's in no way ready for its next close-up.

Squatters, junkies, and prostitutes have turned the vacant building into a crackhouse

, and residents of the tree-lined block say their safety is at risk.

“What was once a nice neighborhood is going downhill because that place is a haven for people who are using drugs,” said architect Adam Kehr, who lives next door. “It’s scary. We have people walking across our property to go in there to do drugs at all hours of the night.”

The house went vacant last winter when the owner moved out, and has been falling apart since--the building has even been on fire twice since abandoned. The new owners have put up a fence (though the permit expired in March), which the neighbors say make things worse as it provides a protective shield for trespassers to do illicit things. Allegedly the fence needs to be up in order "to demolish the crackhouse to make room for a 20-unit condo," otherwise the necessary permits to tear it down cannot be obtained. Last year Brownstoner took a closer look at the Victorian-era house, before it became a squatter's paradise.

#59 Orient Ave
#brooklyn
#eternal sunshine of the spotless mind
#real estate
#squatters
#williamsburg
Do you know the scoop? Comment below or Send us a Tip