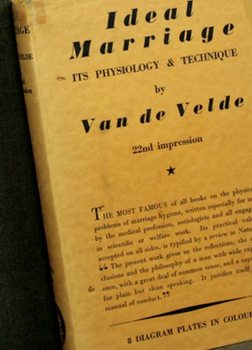 Last year the NYPL received an overdue book with an original due date of August 17th, 1959. The book was Ideal Marriage, by Th.H. Van de Velde, M.D.—in it, the gynecologist focused "on the cultivation of the technique of eroticism as an art in marriage." The book was returned via mail, sent all the way from Arizona some 54 years later. No blushing involved, but an apology:

"We found this book amongst my late brother-in-law's things. Funny thing is the book didn't support his efforts with his first (and only) marriage... it failed! No wonder he hid the book! So sorry!!"

Only one marking was found upon its return: an underlined sentence about men who "only care to relieve their own tensions and care nothing for their wives as an individual or mate."

But the NYPL doesn't want YOU to be embarrassed about your overdue books, no matter what they may be. A rep for the library told us their main concern is getting the books back—"Ideally, we wouldn't collect any fines, because we much prefer to get our books returned on time so others can use them. Our fines and fees are not about collecting money, but about recovering our materials for the public." Still, they do collect a nice chunk of change each year—based on public records, about $2 million in fines and fees annually (as confirmed to us by the NYPL).

Their current late fee is 25 cents a day, but we're told "at a point, books stop accumulating fines and are declared lost, which means the patron needs to pay for the actual items." So just suck it up and return your Henry Miller, your Anaïs Nin, your E.L. James...