Entrepreneurs Make A Killing Off Into The Woods' Captive Line

The Public gives nearly all of the tickets to its Shakespeare in the Park shows out for free at Central Park's Delacorte Theater, which means every morning hundreds of patrons line up and wait patiently until 1 p.m., when the stubs are actually distributed (a few additional tickets are given out in an online lottery, some tickets are sold in exchange for a donation to the Public and there is also a cancelation line each evening). And that captive, educated audience appears to be a lucrative one for smart entrepreneurs and businesses! 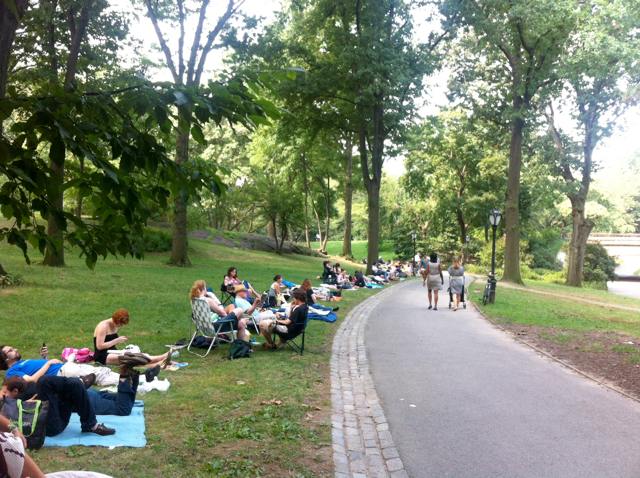 There is money in that there line (Garth Johnston / Gothamist).

The Public tells us they don't like to say what time people start showing up for tickets (presumably to discourage street sleeping—especially as Central Park is closed from 1 a.m. until 6 a.m. and they no longer give out tickets on Lafayette Street) so yesterday morning we arrived at 81st Street to get tickets to Stephen Sondheim and James Lapine's Into The Woods armed with a Crazy Creek, an iPhone and a Kindle at 6:30 a.m. We were not alone. On the street a number of men and women of all makes and shapes were making their way into the woods with something to sit on. And reader, we were late!

By the time we found a spot at the end of the line—down the path, around the bend on the grassless patch beside the water fountain next to the large tree, if you must know—roughly 160 people had taken their places in front of us (by 10:40 a.m. there were about 360 people online, we heard a Public worker say). And that isn't including the much shorter seniors and Americans with Disabilities Act lines which also start at the front. At the beginning of the line were the cardboard sleepers—at least a few of whom we speculated were looking to sell their tickets, which is the most obvious way to make money from the free shows—followed by a mix of everyone with every kind of seating apparatus. Well, no hammocks, as one line dweller suggested—but there was at least one foam mattress!

Then at 7 a.m., like clockwork, the commerce started. First a man on a bicycle slowly worked his way down the line handing out menus to Andy's Deli on 80th and Columbus. Which, yes, delivers to the line. Do they ever. For the next six hours two deliverymen from Andy's were constantly moving up and down, slowly calling out names (which were not necessarily the one that had been given on the phone). Eventually the concessions at the Theater itself opened, but from the number of deliveries we saw coming from Andy's, bringing food to people terrified of leaving the line and losing their spot is clearly good business.

Next up, a gentleman with a cart full of rolled up metal camping chairs moved down offering to rent them to you for the totally reasonable cost of $5 for the morning. He picked up his wares again when the ticket distribution started.

The only other person directly making money off the line was musician Martin Jennings, who worked his way north through the park playing mostly show tunes, mostly Sondheim—he clearly knew his audience—and making what looked like a tidy sum in tips while he was at it. He was still playing after we'd gotten our tickets and left the park. Here he is playing a song from Follies:

And then there were the freebies. Oh, so many freebies! First there was the guy who made sure we all had copies of amNY (the Metro man was nowhere to be seen). Then, two sweet summer interns from Random House worked their way through offering free copies of The Unlikely Pilgrimage of Harold Fry (which at least a hundred people started reading then and there). They told us Random House does that kind of giveaway once or twice a summer. After they passed by, another pair of girls came through with a Radio Flyer filled with crisp, cold apples from Manhattan Fruitier which they handed out for free (along with a 20 percent off code for your next purchase). And then there were the pair handing out vouchers for tickets to Katie Couric's new TV show. Oh, and there was also a pair pushing an online trivia game for good measure (we actually missed talking to them—bathroom break). The best part was watching the different freebie people giving each other their wares. 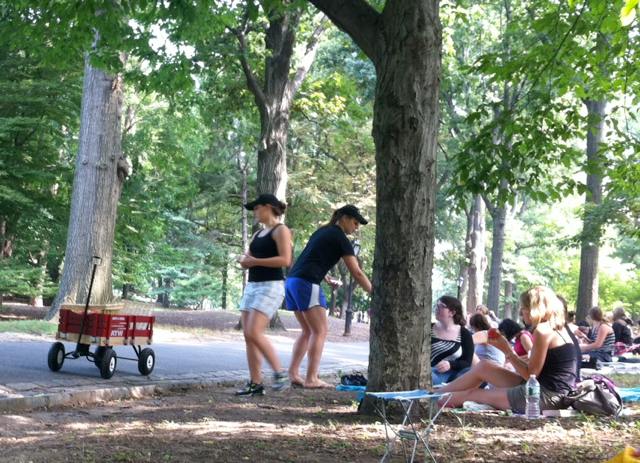 We swear we've heard a story telling us not to take apples from strangers (Garth Johnston / Gothamist).

And then there was the politics! Knowing how peer pressure works, there were people seeking signatures from those on line for causes including Non-Partisan Voter Registration and One Percent For Culture. And the politics didn't stop once the line went away. For some reason New York's senior Senator, Chuck Schumer, was not only at last night's show (though he most certainly didn't wait on line) but was asked to introduce the performance. So he did, with a weird bit of New York culture cheerleading. Let's just say he's given better speeches and move on.

Into The Woods doesn't actually open until tonight, so we can't talk about it just yet, so we'll finish on a depressing note. Curious about just how early the line is starting these days? Here is what the line for tonight's opening performance looked like at 11:15 p.m. last night: 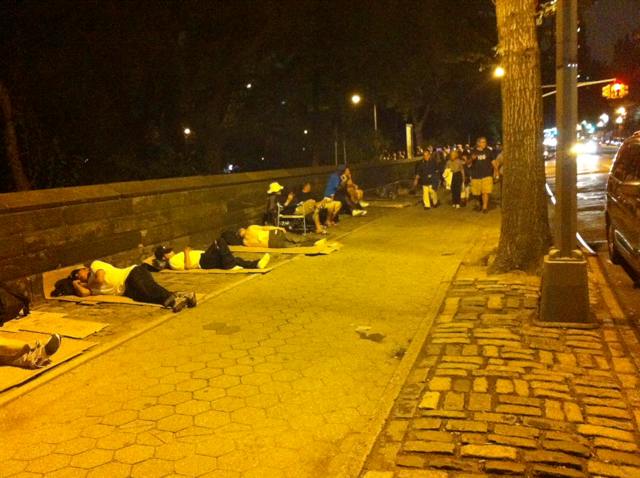 Yup, we asked them just to be sure. Definitely waiting for tickets (Garth Johnston / Gothamist).