Enjoy Art In Odd Places All Along 14th Street This Weekend

Prefer to take your art outside the confines of a gallery? Art in Odd Places is right up your street. The annual offbeat public arts festival is taking over 14th Street this weekend to once again push artistic boundaries with their latest extravaganza, entitled "FREE."

Over 70 artists have contributed to the tenth incarnation of the event in NYC, with an endearing line-up of interactive public art. Yesterday we checked out a couple of installations and chatted with this year's AiOP co-curators, Juliana Driever and Dylan Gauthier. 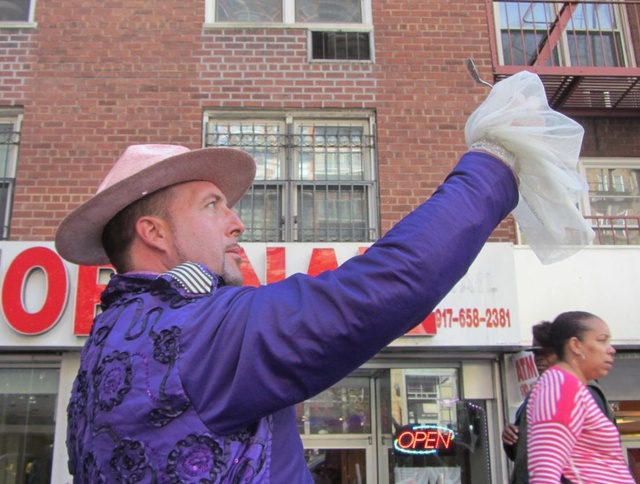 The Duty Free Ranger (Rory Golden) is making his way backwards along 14th Street with the aid of a spoon. When he reaches one end of the thoroughfare there's a swift costume change to master baton twirler. (Jessica Warriner / Gothamist)

"There are some pretty unique factors [about AiOP], there's the fact that there's no budget—this is pulled off completely on a voluntary basis. We do it without permits. So we're not asking permission from the city, or from any organizing body," explains Driever. "We are giving ourselves permission to be here on the street and use the city in the way that we want to use it." 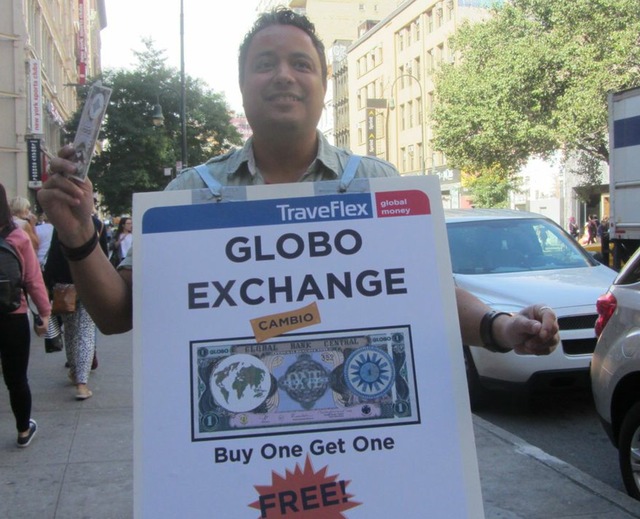 But Driever says that doesn't mean a giant sculpture in the middle of a sidewalk; the pair were careful to make sure their selected pieces and performances would intrigue, not impede. "We're looking for things that are transient or performative, and move with the flow of 14th Street," says Driever.

"The point of the festival is to inject this off-kilter oddity into this street. It's such a strange street already, from block to block it's almost like different cities," Gauthier adds. This year also marks the introduction of FREE Agents, a pilot series that tests the waters to bring AiOP elsewhere in Manhattan and into surrounding boroughs.

Here were a few oddly placed art installations we checked out, ranging from one end of 14th Street to the other: 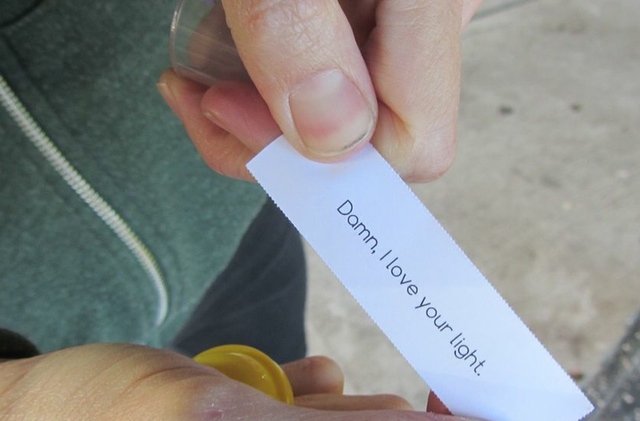 If you're en route to check out the new leg of the High Line, keep an eye out for Leah Harper's installation beneath the stairs at 14th Street and Tenth Avenue. The gumball machine dispenses sweet compliments rather than sugary treats, and all the notes were suggestions from the public. Harper tells us she advertised the online suggestion form in places like Craigslist, leading to some typically Craigslist-ian NSFW replies.

"There was a big variety of responses, and I had to edit some," she admits.

If you're in need of a confidence booster—"You look lovely today," my fortune cookie-style slip of paper read—head on down to the friendliest gum ball machine out. You can also still submit compliment suggestions over at Harper's website.

Have A Seat on the Sidewalk (Walking with Chairs)
Starting at Avenue B, moving all the way to the High Line
12-6pm

"In Dutch, when you ask someone where are you, you are asking 'where are you sitting'," explains artist Ienke Kastelein. "I wanted to make a connection between being and sitting."

Chairs have been a big part of Kastelein's work since 2004, and she's looking to make your average 14th Street walker think about things a little differently.

"When I first came to 14th Street, I noticed people are completely in their own minds," says Kastelein.

So pull up a white plastic chair, take a seat, and cast an eye over the world around you. The dozen chairs will be roaming up and down 14th Street as passers-by take part in the installation (and no doubt wonder why someone's dumped a bunch of outdoor furniture by the road).

We Are All One
14th Street and Avenue of the Americas, between the subway stairs
1-1.30pm

Hungry from perusing all the oddly-placed art? Felipe Cidade is serving up hotdogs, but this North American icon comes with a political a twist. The artist recruited a chef friend to make a recipe for a hotdog with ingredients and spices from countries that were targets of United States military aggression, and he's dubbed it "The Taste of Freedom."

There are info sheets about the project in multiple languages on Cidade's trestle table, and he'll swap a hotdog for some good conversation and ideas.

One of Jody Oberfelder's bubbly assistants is on hand to sweep you up as soon as you exit the subway at the 14th St/4th Ave escalator.

"I've been told not to talk to people but it's just so hard, I just want to talk!" exclaims Ben as he literally picks me up off the ground and twirls me around on the sidewalk.

Ben takes interviewees for Oberfelder's piece on a merry dance before they find themselves in front of the artist and another assistant, who pick their brain about free thinking, ideas and feelings. The discussion is rapid and thought-provoking, and the recordings made at AiOP are part of a larger Oberfelder work. 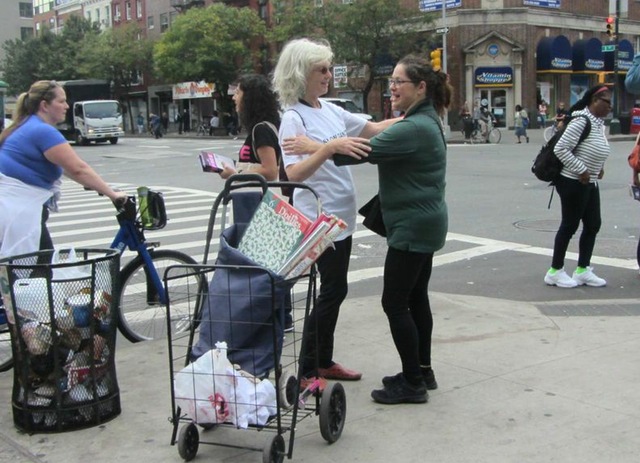 Katya Grokhovsky and her pals are waiting to sweep you up in their arms for a strangely intimate moment amidst the hustle and bustle of Manhattan. Grokhovsky initially developed Slow Dance in grad school, and it's made the transition from a gallery piece to an open gesture on the street.

"People are unsure, they think you must want something," Grokhovsky laughs.

Someone eventually stops for a dance with one of the white-shirted assistants, and the pair make conversation as they side step around other pedestrians. Bedford & Bowery has video: