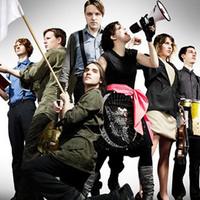 Way back in 2004—before shows were rabidly documented with digital cameras, iPhone videos, live-Tweeting and whatever—we saw a little band called Arcade Fire play at the Mercury Lounge. It was amazing, and we knew we'd never see them in such a small venue again. Afterwards, as buzz built up rapidly around them, Win Butler told us he feared the industry might taint their innocence, and that he'd know it's time to pack things up for good when they collaborate with Sting. No mention of a Grammy.

In their later trips to the city the band played Irving Plaza, Webster Hall, Judson Church, United Palace Theater, Radio City Music Hall (with The National, who documented the tour for us), and most recently: Madison Square Garden. They were also a musical guest on SNL. Their only return to an intimate show here was when they spontaneously busked in Union Square years ago.

Despite all of their success... it seems not everyone in America knows who this band is, and now they want blood after these Canadians stole deservedly won Eminem's their Grammy award last night! A Tumblr titled Who Is Arcade Fire? has popped up documenting the hilarious Tweets from the outraged masses—amongst them are Tawny Kitaen and Rosie O'Donnell. It's sort of reassuring, though, that not everyone out there gets it, because maybe this can keep happening:

Over at the Village Voice, there's a lengthy Grammy postmortem discussing the Arcade Fire win more in depth.

UPDATE: For what it's worth, it appears the Who Is Arcade Fire? Tumblr idea was lifted from this Brooklyn Vegan post from yesterday. So derivative... but we're still glad it exists.