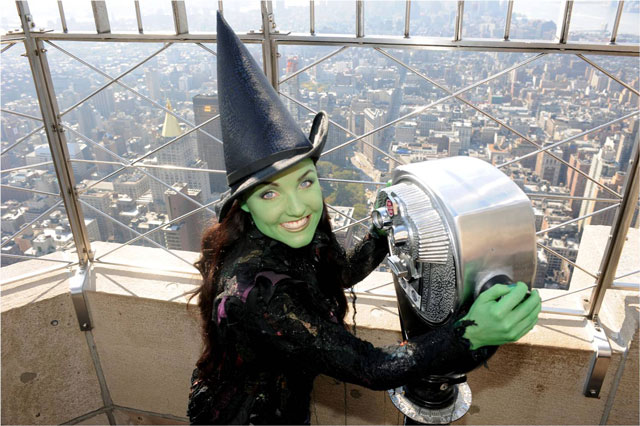 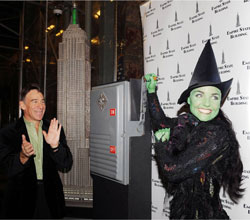 The Empire State Building started celebrating Halloween a little early today, as Wicked composer Stephen Schwartz and Kerry Ellis (aka Elphaba, pictured) came to light the ESB green. This is all in celebration of the show's 5th anniversary on Broadway. Variety recently noted that "after five years on the Gotham boards, the perennial top dog of Rialto sales has racked up the kind of numbers that make Hollywood sit up: Universal Pictures, the studio that first optioned the 1995 novel and one of the producers of the tuner, says Wicked counts among its most profitable properties." The flagship New York show itself has weekly tallies that often surpass $1.4 million! Guess they have a lot to celebrate.

As for this Friday's Halloween celebration, expect to see the Empire State building lit up in orange, black and white.

#5th anniversary
#broadway
#empire state building
#green
#lighting
#wicked
Do you know the scoop? Comment below or Send us a Tip