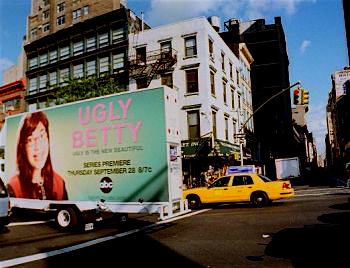 Though the show takes place here, Ugly Betty isn't actually filmed in New York; the first two seasons were filmed in Los Angeles. However, with Gov. Paterson's new tax credit program, the show may uproot and make a move east.

Variety reports that the city may be cast in its own role as early as next season. But just as New York was unhappy about losing movie money to Connecticut, LA doesn't want to bid farewell to Betty. If it goes through (ABC hasn't commented just yet), over 100 employees of the show will be left behind. In the coastal tug-of-war, Paterson's plan is the strong arm; under it "the percentage of qualified film production costs eligible for a tax credit tripled, from 10% to 30%. New York City chips in an additional 5% tax break."

Last year, production designer Mark Worthington discussed the “New York scenery” that the show uses, which is all created digitally. Blue screens and computer imaging, along with "high definition digital video of New York City that was pre-shot and then superimposed," all make up the faux-NY. Fun fact: Broadway & 3rd in downtown Los Angeles looks exactly like Queens!