Who’s excited for True Detective 2: look who’s detectiving, too; the search for America’s next top true detective; the true detectivette; detective world; too true, too detectivey? I WAS until Gothamist was kind enough to connect me with some screeners for the first three episodes, because I hated them. But that’s probably irrelevant given how in love I was with the first season, like batshit head over heels—it was my lover, my father, my mother, my friend; my sin, my soul, my d.e.t.e.c.t.i.v.e. — and how primed I probably was to be disappointed by this one no matter what. Although, it is getting progressively better.

Over on Slate, Willa Paskin has a good summary of what’s actually going on this time around, which was useful for me even after seeing the same episodes she did. I'm pretty bad at following TV plots in general, especially when there's a long scene with a bunch of dudes sitting around talking about money, because it's like hm, what’s going on with that guy’s jacket, and is it really possible to be that drunk and yet also sober, and has anyone actually smiled in this episode? Did Rust ever smile? I know Marty did. And then the scene is over and I missed why the dead guy in the car is so important and where all the money came from. Or maybe the scene was just boring.

My main complaints so far are that this second season feels muddled, dull, and self-serious—at times it even feels like a jokeless Funny or Die spoof of itself. But maybe that's because it's also weirdly repetitive: both seasons co-star grim, beautiful cops who live alone in spare apartments that for whatever reason have—or come to have—weird wooden statues in them, as well as dark books and bottles of Jameson. (Okay, the statue thing might be a stretch.) Also in both: cigarettes that make noise; strange masks and mysterious scars; cops complaining to one another about doing goofy, irritating shit in the shared cop car; and unsmiling men in moody, low-lit bars having meetups like it’s the seediest and most important thing in the world.

But maybe those are just parts of Nic Pizzolatto's fingerprint, and I'm a lunatic for trying to point out an ex's shadows. I think it's mostly that I'd hoped this season would be completely different. That the thing that would repeat would be the magic, not the format. That it would be about gemologists, or ancient Egypt, or horses. Anything but about actual sad detectives with troubled pasts. Although I realize that that's ridiculous. Maybe it's just that I really miss Cary Fukunaga. (Oh, and then one episode includes the line “You ever bully anyone again, I’ll come back and butt-fuck your father with your mother’s headless corpse on this goddamn lawn.")

So far this is my favorite review: 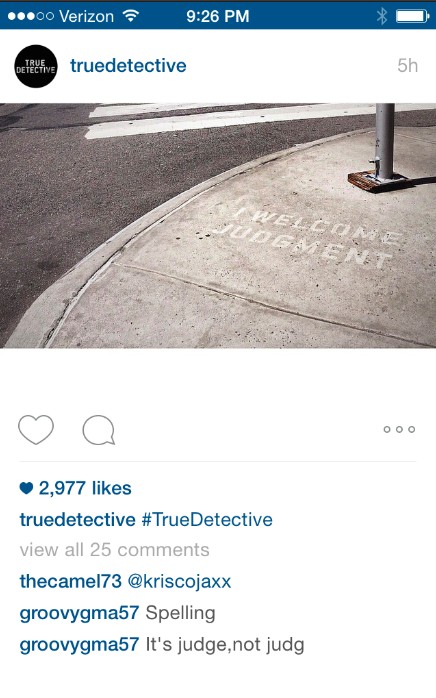 To be fair, though, the experience of watching TD2 in advance mostly just made me feel lonely, because it reminded me of how much fun I had last season. How surprising and strange and wonderful it felt to fall in love with a television show. It was irrational, it was beautiful; I felt crushed when it was over. Because, of course, it wasn't just the show, it was the side worlds and the connections that the show inspired, of fans conspiring and creating and generally going nuts together, and I hadn't felt that way in a long time. A long, long time.

And not being able to text, chat, tweet, or check Reddit during and after what I've seen so far made it feel like listening to a CD instead of the radio, or like being in a vacuum, so maybe once the show comes to life on Sunday it’ll all feel more alive and interesting, and I’ll slink off in shame.

Except I didn't like it and my heart is broken, and how people can actually write smart, impartial television reviews is beyond me.

Edith Zimmerman is one half of True Direction, the internet's premier destination for True Detective/One Direction mashup vines.