SPOILERS AVAST THERE BE SPOILERS!

Childress. Now there's a name hasn't gotten quite enough attention from True Detective obsessives. It was first invoked halfway through episode one, which makes sense considering writer Nic Pizzolatto says 85 percent of the mystery's clues are folded into that first episode. Ted Childress was the sheriff in Erath when young Marie Fontenot disappeared in 1990—he's relocated and out of the picture by the time Hart and Cohle show up in his successor's office in '95. The official story was that Marie's father took her away from her prostitute mother—we're told Sheriff Childress knew Marie's family, and everyone agreed the girl was better off with her daddy. But the truth, according to a videotape found in Reverend Billy Lee Tuttle's safe, is that Marie was raped and murdered in some sort of horrifying backwoods ritualistic sacrifice.

The name Childress pops up again in episode five, "The Secret Fate of All Life." One of the officers who escorted the double murder suspect Guy Francis to his cell before he killed himself—Francis, you'll recall, told Cohle he'd never actually caught the "Yellow King" in '95 —was named Childress. And now in episode 7, we learn from Sam Tuttle's former maid that the oft-mentioned tall man with the scars on the bottom of his face was one of Tuttle's grandchildren, and a Childress. His father "did that to him." Sam Tuttle is Reverend Billy Lee Tuttle's father, so it seems likely our Green Eared Spaghetti Monster is a blood relative of the good reverend, and possibly the son of former Sheriff Childress. Carcosa appears to be the name of their traditional human sacrifice stomping grounds. And Eddie Tuttle, Billy Lee's cousin, is no longer Governor in 2012—he's senator. And my head is spinning. Where's that flask? 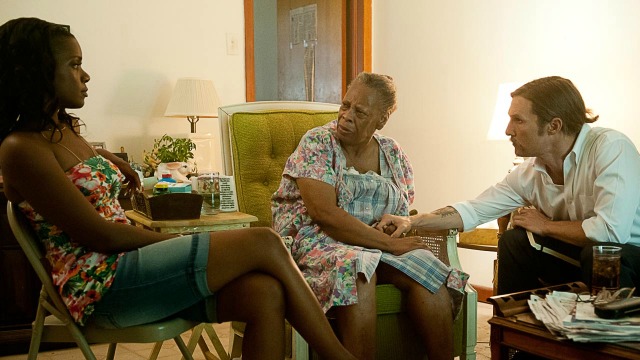 Yes, True Detective has certainly taken us to a dark place, but you've got to credit Pizzolatto for not shoving gratuitous gore in our faces. The horror is pointed to, and that's more than enough, and this leaves more room to focus on his characters' struggle to process the atrocity they've uncovered. After six hours of enthralling exposition, it's a thrill to see these two washed-up ex-cops reunite to finally settle their old "debt," as Rust so effectively puts it. We even loop back to one more fraught Car Talk, with Rust intoning, "I don't like this place. Nothing grows in the right direction." Classic Rust! Marty can't even... Sure is good to have the band back together again.

Some people had theorized that in an extravagant climactic twist, the Yellow King would turn out to be Marty, and while there are some intriguing visual red herrings to suggest that outcome, it now seems highly implausible that either detective, for all their flaws, is involved in covering up or perpetrating any of this. What has made this debut season of True Detective so deeply satisfying is that the murder mystery plotline is in service of a more universal story about two estranged men and their isolation and cruelty and weakness. Yes, Marty is a human tampon who deserves his fate, but that doesn't make the montage of him drearily surfing Match.com and eating TV dinner alone any less heartbreaking. And how perfectly pitiful is it that he names his company Hart Investigation Services, a.k.a. HIS?

Marty's scene with Maggie in her well-appointed home was perplexing. (It's up to you what you want to do with the photo of Audrey next to her painting with the BLACK STARS, below.) I was convinced Maggie's father, about whom much has been wildly speculated, was about to saunter in, but instead the scene stayed personal and sad. Stupid Marty appears to have almost no contact with his daughters, and while the reason for his visit is ostensibly to confirm that Maggie told officers "Fuck & Suck" nothing to arouse suspicion, you keep wondering what else is going on here. 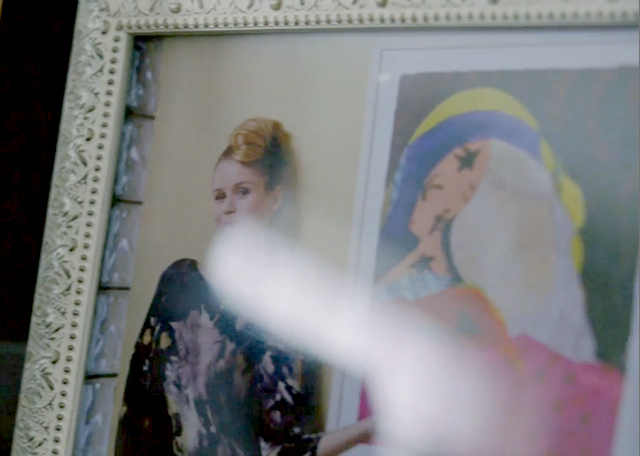 A photo of Audrey seen in Maggie's home.

Maggie may be right when she asks Marty if he's come to say goodbye; he doesn't deny it, just says "thank you." (Which is sweet, but he's still a human tampon.) And that last farewell comes on the heels of a long, harrowing close-up on Marty's face in the storage locker, which may not mean anything, or it may mean that he suspects Maggie's father is involved in this Carcosa horror, and on some level Marty knew it all along. (One Gothamist staffer is convinced Maggie herself knows about the abduction ring, but that staffer has clearly been driven insane by The King in Yellow.) Maggie's sudden appearance in Rust's bar (WEARING YELLOW!) is also a tad mysterious, but maybe Pizzolatto wanted to give viewers closure, and maybe she really is worried about Rust. She shouldn't have. "It never sat right with me then and it doesn't now," Rust tells her, "you asking me to lie to you about him." Boom. Such a great line, when you think about it. It's another heartbreaking moment in a series full of them.

And wow, Rust's storage locker, which looks exactly like the True Detective subreddit actualized IRL, is a thing of magnificently creepy beauty. This is where Rust has really been doing his drinking, and although at first glance it seems like pure tinfoil hat territory, it is in fact one true detective's successful unraveling a sprawling conspiracy. And it's one that has a basis in real life; Pizzolatto has alluded to an incident in Louisiana in 1995 in which a church group was "accused by the police of a litany of ungodly offenses, including sexual abuse of perhaps two dozen children and the mutilations of cats for satanic rituals."

Much was revealed in this gripping penultimate episode, including one victim's disturbing firsthand account of frequent sexual abuse by men wearing animal masks at one of Tuttle's schools. And when Marty finally agrees to help Rust ("it took some convincing") he goes all in, and soon discovers that old Steve Geraci was working for Sheriff Childress when Marie Fontenot disappeared, and never said anything about it during the Dora Lange investigation. You'll also remember Geraci from that first episode; he's the glassy-eyed drunk cop whom Rust slaps across his sodden face in the police station. Now he's Sheriff Geraci, and after a chilling chat on the golf course (I love the juxtaposition of the lush green country club with Geraci's sidearm) Marty concludes he's part of the cover-up. And so we find ourselves with a great excuse to drink Lone Star first thing in the morning on a boat with ol' "Rummy." The sheriff may be tired of Marty's pesky questions about the Fontenot girl, but something tells us he's going to like Rust's method of inquiry even less.

"After You've Gone" ends with one hell of a harrowing coda: the return of the lawnmower man, a.k.a. Errol Childress, a.k.a. The Green Eared Spaghetti Monster. Once again, he's passed over by distracted detectives who've got their eyes trained elsewhere. As a bickering Gilbough and Papania speed off in search of a church, we're left alone with scary Errol (HELP!) and his proud affirmation that his family's been in the area a "long, long time." He appears to be mowing a graveyard's grass into a nice flat circle of time.

Another man's lawn always needs to be mowed, death is not the end, and Cohle still has a way to go before he can end his life's "circle of violence and degradation." He's got about an hour, to be precise, until he can "tie it off"... and then start the whole circle all over again when we press play on episode one all over again. Next week's final chapter is called "Form and Void," which is of course how the Book of Genesis begins: "And the earth was without form, and void; and darkness was upon the face of the deep." And it won't stop touching us back!

#true detective
#original
Do you know the scoop? Comment below or Send us a Tip