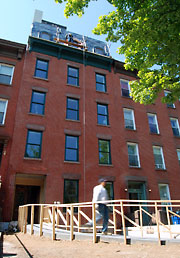 Last week the Brooklyn Paper reported that MTV's Real World cast would be moving into a Downtown Brooklyn loft; this week they have much more believable news of the locale. Sorry Carroll Gardens, looks like the network has their eye on you.

A property owner in the 'nabe says he's in negotiations which may land the seven strangers into his "gorgeous, six-story, five-unit, gut-renovated brick rowhouse on Third Place (once ranked #23 in ToNY's best blocks list). Just how real is this rumor?

“We entered into negotiations,” the property owner said. “We finalized some negotiations at least six weeks ago. My understanding was that MTV did approve the location, but we’re still in negotiations.”

The show's producer Jim Johnston confirms they're looking at Carroll Gardens. If they move in, the pampered bunch will be treated to an elevator building with "new appliances, mahogany floors, a cool, hip, 1970s vibe." Each of the five units would normally get $1M or more on the market.

Photo of the 3rd Place residence via the Brooklyn Paper.

#brooklyn
#carroll gardens
#mtv
#reality tv
#television
#the real world
Do you know the scoop? Comment below or Send us a Tip