It feels wrong to call a biopic about a man who committed suicide a "feel-good" film. Certainly The Imitation Game, Norwegian director Morten Tyldum's film about oft-forgotten WWII-era mathematician Alan Turing, doesn't forget the most tragic details of its subject's life—after cracking the Nazi's "Enigma" code and cutting the war short by a handful of years, Turing was prosecuted for "homosexual acts," chemically castrated, and ultimately took his own life at age 41.

But though the script doesn't skate over any of that, there's still something oddly optimistic here, perhaps because it so closely follows the same formula you'll find in virtually every biopic that's preceded it. Not that The Imitation Game is a poor film, because it isn't. It's engaging, charming, and impeccably acted by star Benedict Cumberbatch, whose Turing is unflinchingly heartbreaking.

The film uses a framing device to tell its story—Turing, arrested on indecency charges, tells his story to the arresting officer. In the early 1940s, the socially awkward, maddeningly genius Turing joins a codebreaking team at Bletchley Park in Buckinghamshire, England, where he's tasked with cracking the impossible Enigma code. There, he butts heads with the other team members (Matthew Goode, Allen Leach, Matthew Beard) and earns the ire of head codebreaker Commander Alastair Denniston, played by Tywin Lannister Charles Dance. He works tirelessly on a machine he believes will crack every cipher Enigma emits, despite harsh criticism and disbelief from his fellow team members. And he befriends brilliant young codebreaker Joan Clarke (Keira Knightley), the lone female on the team.

The Enigma team scenes are interspersed with flashbacks to Turing's days as a schoolboy, where he was routinely bullied by teachers and students alike. He eventually befriends a boy named Christopher, whom the film makes clear was Turing's first love.

Eventually, **SPOILER ALERT** Turing's machine works, and he and the team manage to crack the code. Not that the suspense ends there—there's a spy among the team's midst, and Turing, already keeping secrets of his own, gets swept up in the drama. And later, Turing's homosexuality plays a key role, eventually stripping Turing of his sexual freedom, his life, and his public place in history.

It seems, though, that the sad bits of Turing's life are treated with kid gloves. Eventually, Turing's team learns to accept him, despite his eccentricities. There are a lot of rousing speeches, particularly a wholly fabricated scene between Joan and Turing toward the end. And the film is as PG-13 as it can get, eschewing any physical manifestation of Turing's homosexuality (he's arrested after getting into a sexual relationship with a 19-year-old), and referring to Turing's suicide only in a post-film title note.

Perhaps it's this omission that's most frustrating, as a viewer. At a 92Y Reel Pieces event on November 16th, star Cumberbatch told moderator Annette Insdorf and the audience that a scene depicting police officers finding Turing's postmortem body ended up getting cut from the film because it "didn't feel right." Instead, writer Graham Moore inserted the aforementioned scene between Joan and Turing: "No one had told him that in his life. So to end it on that note, with someone explaining, was our way of thanking him in the structure of the film, our eulogy to him," Cumberbatch told the crowd. It's a nice eulogy to be sure, but it's also wholly unbelievable, saccharine, and reeks of Hollywood airbrushing. 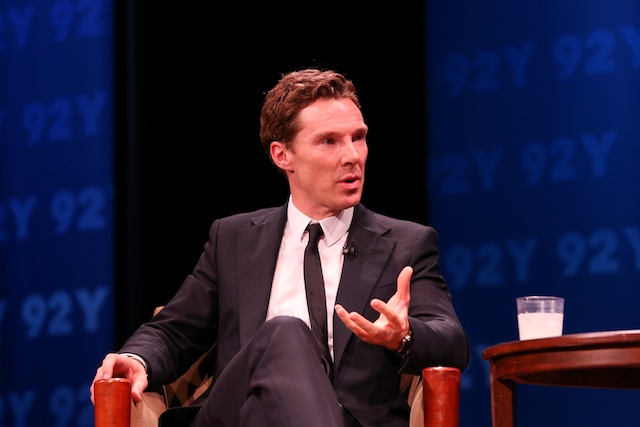 Still, it's about damn time Turing got the movie star treatment. Aside from breaking Enigma, which researchers believe shortened WWII by two to four years, he's considered one of the first computer scientists, having designed the computational Turing machine, one of the primary computer models, early on in his career. That his contributions to society were so grossly overshadowed by a Draconian criminalization of homosexuality is horrifying, and it's noteworthy that he was only posthumously pardoned by Queen Elizabeth II last year, with the pardon made official just this past August. "His photo should be on the covers of textbooks," Cumberbatch said at the 92Y event, noting that he felt compelled to play Turing to "serve his legacy to a broader audience."

The Imitation Game succeeds, in this regard. It'll also help serve Cumberbatch's own legacy—Insdorf teased him about Oscar season, and there's no question he deserves a nod, even if the film itself is a tad too slick and conventional for a man who was anything but.

#92Y
#benedict cumberbatch
#the imitation game
#original
Do you know the scoop? Comment below or Send us a Tip