The Designated Mourner: A Chilling Masterpiece Not To Be Missed

"Let’s not talk about the whole world!" Jack snarls at Judy deep in the bitterly honest core of Wallace Shawn's extraordinary play The Designated Mourner, which, after 13 long years, has been vividly revived in NYC by inimitable director André Gregory at the Public Theater. Unfortunately for Jack, the whole damn world has a savage habit of intruding on us all sooner or later, and in Shawn's play it's finally crashed through the gates guarding a small, pampered breed of highly-cultured liberal elites. Jack is their witness.

The Designated Mourner is set in an unspecified city in an unspecified country, around the time of a bloody crackdown by a ruthless new regime on par with Augusto Pinochet. We personally meet just three residents of this terrorized metropolis in person: the erudite Howard (Larry Pine), whose late father was a very high-ranking member of the once-dominant political party, his devoted daughter Judy (Deborah Eisenberg), and her shiftless husband Jack (Wallace Shawn).

In Howard's youth, as Judy explains, he caused a scandal with a radical book of essays called The Enemy, which sympathized with the oppressed classes and their feeble rebellion. It was only because of his father's prominence that Howard was “allowed to exist” and even continue writing—though his transition from prose to poetry made all the difference. It meant, in Judy's words, "that the charming little gang who led our country never read what he wrote, as the only members of the gang who could understand poetry at all were undoubtedly Father’s own father and our playful President himself, who, out of respect for his old comrade-in-arms, my appalling grandfather, undoubtedly made the decision just to look the other way." 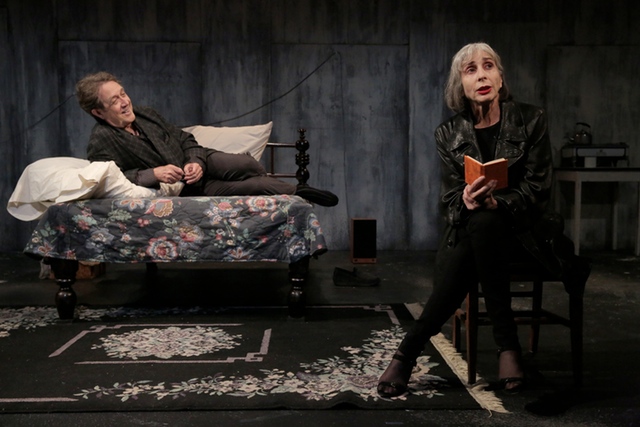 Howard holds court in his comfortable old home, frequently surrounded by an embattled group of highbrow literary elites, and Jack, who describes himself as a "vague hanger-on," simultaneously envies and despises the whole lot of them, Howard most of all. His disdain may have something to do with Howard's hilarious condescension, or that day Howard found Jack in flagrante delicto with a woman who wasn't his daughter Judy, or jealousy over Judy's unflagging devotion to her father. But Jack's hostility toward the almost universally beloved Howard ultimately appears to arise from very different views of that "whole world" which, in The Designated Mourner, keeps refusing to stay outside where it belongs. As Jack puts it:

If you look at the world, the world as a whole, actually most people in it are the ones we can only refer to, rather nervously and gingerly, by means of those terribly melodramatic and almost hysterical words like “wretched,” “miserable,” “oppressed,” “desperate,” “powerless,” “poor” — that’s a very sympathetic one — or to put it a bit differently, God bless them, they’re people who simply don’t have any resources of any kind at all. And these particular people — and, you know, God knows why — well, they just don’t like us. They don’t like us. They simply don’t like us.

So it’s not hard to see what will happen one day. There’s the majority, them, the minority, us, and the way they feel about us, great dislike, very, very great dislike. So, in other words, “enemies” are not exactly imaginary beings. They’re very, very real. But I’ll tell you something interesting about enemies, you see. At least this is how I feel about it. I’m sure you know that rather nasty and not terribly thought-provoking old saying that “the enemy of my enemies is my friend.” Well, what’s really much more true to my sense of life is that the friend of my enemies is for sure my enemy, while in a funny way my enemies themselves don’t bother me that much, and at various moments I can even work up quite a bit of respect for them, looking at it all from a certain point of view.

It’s that thing of people whom you actually know and with whom you actually live deciding consciously to become the friend of your enemies that can get you really terribly upset, because your enemies after all are actually trying very hard to kill you, no matter what you may happen to feel about them — and this is where things with Judy and Howard really became so difficult, because they’d worked themselves around to being so horribly appalled by the disgusting rats that they saw encroaching everywhere on their perfect existence that they ultimately decided that the people whom they actually ought to like were, yes, that’s right, precisely the ones who were sitting around making plans to slice our guts out...

[WARNING: "SPOILERS"] If man is a political animal, Jack is a proudly apolitical rat, a cunning survivor who is revolted by Howard and Judy's sanctimonious flights of liberal piety. But in the end the enemy at the gates turns out not to be a revolutionary mob but a new ruling class, which cracks down violently at the first hint of dissent. Eventually they get around to Howard's literary circle, and in a scene chillingly narrated by Judy, they're all carted off to prison. 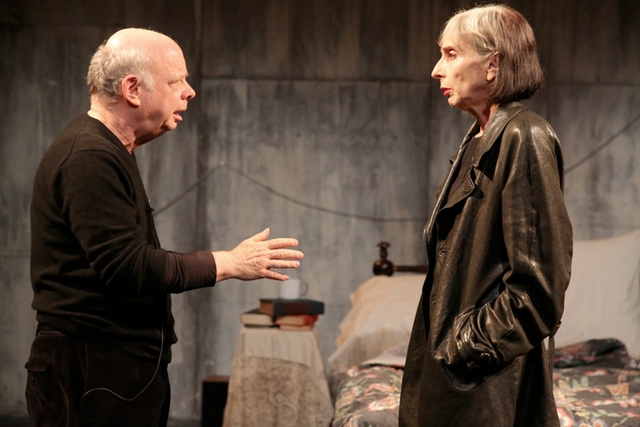 Not Jack, of course—his overriding concern for himself keeps him under the rats' radar, and part of what makes The Designated Mourner such a fascinating play is the almost unbearable tension between the personal and the political, which has long been a focus of Shawn's marvelous plays. There are climactic points in history where there is no longer any luxurious room for the privileged few to separate the personal from the political, where one can no longer hold certain political views with little to no personal cost. In The Designated Mourner, tumultuous waves of political oppression are constantly crashing into Jack's solipsistic bulwarks, ultimately drowning his relationship with Judy, who, like her father, does want to talk about "the whole world."

Of course there is real no boundary between our political beliefs and our personal lives, but it's easy for many of us, in America at least, to pay lip service to the former and obsess over the latter. (Congress's failure to pass any meaningful climate change legislation horrifies me, for example, but I suppose I'll keep contributing to global warming by flying down to Miami for vacations until South Beach is submerged.) But it turns out that Jack's obsession with metaphysics, not politics, becomes the play's most breathtaking turning point, as he realizes quite dramatically that what he thinks of as his "self," his persona, is merely a random pile of "bric-à-brac":

...just everything my life had quite by chance piled up — everything I’d seen or heard or experienced — meticulously, pointlessly piled up and saved, a heap of nothing, a heap of nothing which had somehow been compressed into some sort of a form and which had somehow succeeded in coming alive, and which quite ridiculously now sort of demanded tribute, declared itself great.

In the end, Jack abandons all pretense of his carefully-curated identity, an act which he describes in great detail as a "fucking relief," and gives up pretending to give a shit about poetry and literature. He embraces a "lowbrow" lifestyle, and after the last of the intelligensia is eradicated by the murderous regime, he turns around one day and realizes he's the only one left who even remembers that there were people who appreciated, say, the poetry of John Donne. He ironically declares himself the "designated mourner" for this extinct species of high culture guardians, and it's clear he's happier without them, because there's no one left to make him feel inadequate for wanting to read a celebrity gossip magazine instead of a sonnet.

The world of The Designated Mourner has the feel of a very dark fairy tale, evoked by a minimal set that conjures up a decaying, bygone elegance. Doric columns frame a shabbily furnished garret dominated by a large bed upon which Howard, brought to pompous life by the lovable Larry Pine, spends most of his time. Yet within that single room, a chilling and often very funny story of political strife and personal heartbreak is brought palpably to life, on the strength of Shawn's evocative writing and the lived-in performances. Eisenberg, a highly regarded short story writer, portrays Judy as a brittle yet unflinching observer of brutality, and her stage presence is simply unnerving. 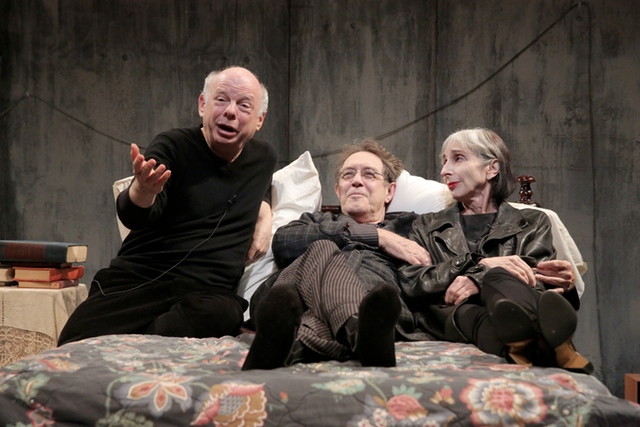 And then there's Shawn, the unlikely mainstream movie star, the privileged child of that famously eccentric New Yorker editor William Shawn, and the radical subversive playwright, whose decades-long collaboration with Gregory is being celebrated this year with two productions presented by The Public Theater and Theatre for a New Audience. In the same way that Pinter, at his best, makes audiences simultaneously uneasy yet riveted to their seats, Shawn takes a meat cleaver to haute bourgeois complacency (always carving himself up first) and theatrical convention, serving us our heads on a platter with odd, searing wit.

In The Designated Mourner, the whole disturbing story is unfolded by characters directly addressing the audience, only occasionally engaging in dialogue with each other. It's difficult to articulate how or why this works, but the accumulative effect is mesmerizing. Shawn's performance—narrow eyes ablaze, small hands gesturing at times like a commedia dell'arte grotesquerie—is intensely funny and unique. He's obviously in his element here, and it's fascinating watching him work through Jack's crises of identity and politics and sex and love—the latter an emotion Jack resists throughout, finally deciding, after bidding Judy goodbye, that "a burden was lightened now that love was gone. It had always been a difficult word for me."

The questions raised by The Designated Mourner aren't in themselves new, but the bracing way they are framed and articulated is what makes the play so enduring. What is consciousness? How do we reconcile the systematic oppression of billions of people with our own easily ignored participation in this system? What price is paid for the nice things we so enjoy? How do we protect ourselves from terrorism without becoming prisoners, or ignoring our government's role in planting its seeds? How can a bag of pornographic magazines found in a puddle provide such an escape, and then wither and die? How do we resist becoming monsters in a society that makes the monstrous seem normal and easy?

The performance, in the Public's smallest 99-seat theater, feels incredibly intimate; there is little distinction between spectator and performer. The Designated Mourner's legendary American premier, which I was fortunate enough to attend in 2000, was staged in a dilapidated men's club down on William Street for just 20 people at a time. (The first act was performed in what appeared to be an old ballroom, the second act in the brightly-lit racquetball court.) It is something of a relief to see that the play is just as enthralling without the site-specific element, and its electricity may surge even stronger in 2013 than when it first premiered, before 9/11 and the Bush administration. That production boasted the same ensemble and director, and it's a rare thrill to find the same group of talented iconoclasts reprising their roles in a work of such peculiar genius.

The Designated Mourner continues at The Public Theater through August 25th. Tickets cost $86.50 for non-members, $50 for members, and a limited number of $20 rush tickets are available for every performance. Details here.

#the designated mourner
#theater
#theater review
#wallace shawn
Do you know the scoop? Comment below or Send us a Tip