Paul Schrader's newest film The Canyons premiered in NYC last night. You've probably heard about it because Lindsay Lohan and porn-star James Deen are in it. It was crowd-funded. Brett Easton Ellis wrote the script. Last night we finally checked it out, and Schrader stuck around to talk about it.

The film opens with shots of abandoned theaters. Beautiful, haunting shots of decrepit cinemas, rotting fixtures, cold seats. Is this the world of The Canyons? These lost theaters—a lost art? A generation that doesn't appreciate the beauty of film because of texting? In Paul Schrader's eye they seem to evoke relics from his bygone era, but what do they evoke for the rest of us?

The first scene takes place inside a crowded restaurant and establishes the main players in all their disinterested glory—James Deen's maladjusted trust-funder Christian, Lindsay Lohan's failed actress and Christian's girlfriend Tara, and newcomer Nolan Gerard Funk's trope-of-a-struggling-actor Ryan. Ryan's girlfriend and Christian's personal assistant Gina is there, but who cares? 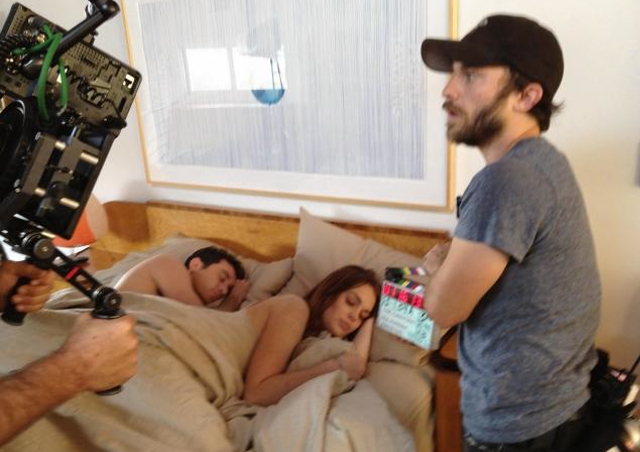 The movie follows the transgressions of sex and love between the stars and other ancillary characters as all involved grow more paranoid and anxious about their dalliances. In this regard, it's typical Bret Easton Ellis—meandering in some ways yet focused in its concentration on a few days in the lives of the super-rich and super-bored. The audience waits for that trademark explosion of ultra-violence. We get it, but it's muted. Almost non-violent. It feels cheap in a way that is probably "the point." We can imagine Ellis saying it's totally justifiable, because violence is always cheap in his world. These people do these things and it doesn't matter and they get away with it and then they move on and do some coke. It's still not my world. The edgy, alt middle-schooler/high school freshman actively loves American Psycho. It's hard to love Ellis in the same way one did through puberty.

The filming of the movie—produced on a shoestring crowd-funded budget—and the casting of Deen and Lohan are inextricable from the finished film. It's all a part of the mythology that has developed over the past year. The New York Times Magazine feature, "Here Is What Happens When You Cast Lindsay Lohan In Your Movie" only added fuel to the fire as it chronicled Lohan's antics during the filming. As Schrader noted, "not even the august Times is immune to this hurricane of celebrity." The article, Schrader said, was supposed to be about the "new Lindsay" but the old self-destructive one showed up instead, and so that's the kind of publicity they received.

But Lohan is good. At times, very good. She has moments of brilliance and clarity; they emerge at times that call for strength. When she must make decisions—for example, in a sex scene reminiscent of Spring Breakers' gun-fellating threesome, or when Tara meets up with a former lover of Christian's—Lohan is nothing short of spectacular. When the film's power dynamics favor Lohan, a talented, underrated actress remerges. Perhaps it speaks to just how fucked up she was—how fucked up the exposure and celebrity sideshow her life had become—that when she gets a chance to be in control, even in the "imaginary" cinematic world, she runs away with it.

As for the rest of the film, at best Lohan has a manic desperation that works for a character who has probably been doing this shit long before the camera shows up, a defeated and tired lay-about. At worst, one can feel her personal indifference, though the instances are few and far between. There is the tendency to sarcastically dismiss her troubles—"It's her fault, she has millions, why should I care, she's famous," et cetera—but that doesn't really take you anywhere. Schrader knows Lohan and cares for her, which cannot be understated when considering where this film is successful: "The phenomenon of Lindsay is such that it makes normal people do stupid things." He was sensitive to her at a time when it was almost impossible to be.

The same compliments can't be given to Deen, though he is quite serviceable. Bad guy roles always call for a certain kind of acting, often an over-acting, to bring them to life. In good hands, that's fine, because really good actors can chew scenery without spitting all over you. Deen is good, but his character calls for a certain disposition that it felt like he was looking for throughout the whole film. Somewhere in between Patrick Bateman and Cruel Intentions. I imagine that one of the things that makes Deen so popular in the porn world is what ends up hurting more than helping him here: he is too All-American. It's hard to feel his menace when you are confronted both with the effort he is exerting in most scenes and his boy-next-door looks. That said, he also has strong moments—his, unsurprisingly, come when he is more immersed in his sex-charged element of physicality and silence. The more concise he is, the better he is.

Visually, The Canyons evokes an over-saturated Grand Theft Auto game with trails on—every light floods and spreads and flares out. It's a boozy, dreamy aesthetic that's not unwelcome. The film's relationship to technology, however, is less dream-like, but just as fantastical. The opening scene has Christian showing Tara images from a sex social network on his phone during conversation. Christian invites men and couples over from the Internet for sex misadventures (technology!). Tara is often anxiously preoccupied with her phone and where it is at any given point. There is even a bizarre moment where Tara receives a text message while at home and it appears on the television screen through some strange "TexTV" application. It's these instances (and his comments after the film) that mark Schrader's world as different than ours. His technology is not mine. I don't sext on SnapChat. Maybe that's just the millennial talking, though.

My experiences with a director talk-back after a screening have been limited but less-than-great—Schrader didn't make me regret staying though, and he did expose some of the other issues with the film.

I didn't like The Canyons, but I liked thinking about it the following morning. After that? Who knows. Schrader said he told Ellis that they could make a movie together for pretty cheap—"What you write about is beautiful people doing bad things in nice rooms." They accomplished that.

#james deen
#Lindsay Lohan
#Paul Schrader
#review
#the canyons
#original
Do you know the scoop? Comment below or Send us a Tip