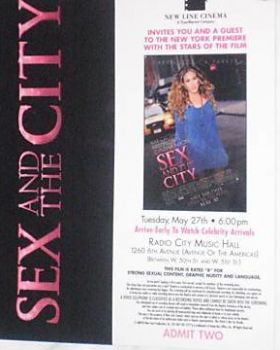 Though the trailer echoed the sentiment that "Brooklyn is the new Manhattan," and SJP herself called the outer boroughs "desirable," last night the Sex and the City movie premiere took place smack dab in the middle of town at Radio City Music Hall.

The NY Post reported back with bold face names and pull quotes from the Swarovski crystal-adorned pink carpet (yes, it was pink), where Carrie & Co. assured us all that the best part about the night was "being here with the fans."

The organizers of the event weren't too concerned about those fans, however; seems they overbooked the 6,000 seat theater by about, oh, 2,000 or so...and like that, it went from fabulous to frightful; grown women were heard screaming, crying and rising up against those who had wronged them! If only this kind of passion were ignited for slightly more important things.

The mostly female crowd surged against police barricades, cursing and stomping at the cruel turn of events.

"They gave out all these tickets just to make a big scene. It's not right. It's not fair. I'm very disappointed," said Heather Dispresso, 20, of Long Island, who had waited in line for three hours only to be turned away.

Well played New Line Cinema. Though none of those PR shots seems to be circulating just yet, stories from the fan frontline are! A tipster wrote into Gawker saying that women were "in near tears waving their tickets and yelling into their cells." The fan tickets were mostly promotional, but even the $1,000 ticket holders and their Christian Louboutin heels were left slumming it on the sidewalk. Surely this was all made up for when Chris Noth (aka Mr. Big) blew them all a kiss as he breezed in. Or at least by this morning's bad reviews.

Photo of Sex and the City movie premiere ticket via eBay.