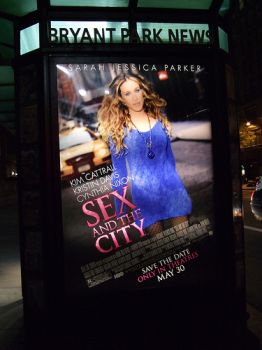 Consider it official, it's Sex and the City month; be prepared to read about the movie up until, and past, its May 30th big screen debut. The ink's been bought by the barrell to promote this release, and even columnist Carrie Bradshaw herself never penned this many words about s-e-x during her career.

NYMag starts things off chatting with the star, Sarah Jessica Parker, in what translates into a seven-page piece. For those who blame SJP for the bus-loads of transplants infiltrating Manhattan and transforming the cityscape, you should know her husband agrees with you.

Parker and Broderick keep a running count of these changes, a mutual mourning for the transformation of their neighborhood into a luxe, tree-lined shopping mall. She knows this sounds absurd coming from her, that people blame Sex and the City for the ruination of the West Village; even Broderick says, “That’s your fault!”

follows with the sentiment that Sex and the City is to blame for the influx of Carries coming to town. The cast defends themselves, though they can't deny that their stoops are being replaced with 40-story buildings.

"When people come up to me on the street and say, 'I just got here from Iowa two weeks ago. Your show made me come. I'm like, 'Oh no,'" said Nixon, who plays reprising Miranda Hobbes. "People do come here looking for love, but what do they find?"

SJP told her fawning fanbase that Brooklyn was the new "place to be", despite the show shunning it when it ran on HBO. Meanwhile, over at The NY Times, director Michael Patrick King focused on another rumor surrounding the movie. Spoiler alert?! No one's gonna kick the bucket with their Manolo-clad feet in the film.

"You don't know how many people came up to me when I was making the movie and said, 'So is somebody going to die?' Yup. Happy summer. Thanks for your $10. Enjoy your Diet Coke. Someone's going to die. Like that's what I'm going to do."

They'll undoubtedly save that plotline for the sequel.

#Michael Patrick King
#movie
#press
#release
#sarah jessica parker
#satc
#sex and the city
#sjp
Do you know the scoop? Comment below or Send us a Tip