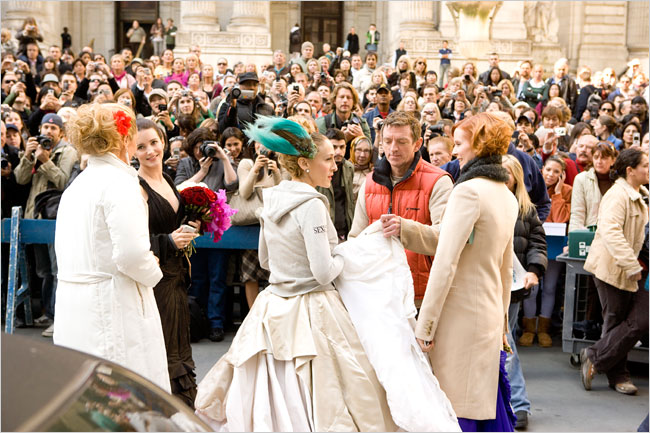 Have you seen Sex and the City filming around town? Seems like some people are watching the cast of the 'ol show film the new movie every step of the way. The Times chronicled the madness and, OMG, talked to Carrie Bradshaw herself (who was hiding away in the basement of the Bryant Park Hotel). She had this to say of her on-the-job craziness: “I basically just look down between every take because it’s too hard if you look up and you see the perimeter is madness.”

The paper also dropped some details about the movie -- spoiler alert!? Samantha now lives in LA! And Carrie is "making a serious attempt at making grown-up decisions about love and about life choices" -- probably not a bad idea for an engaged 40-year old. As for the rest of us, we'll be able to exhale when the movie finally hits the big screen in May of 2008. We wonder what sort of elaborate ad campaign we'll be seeing around the city that has long forgot about Carrie & Co.