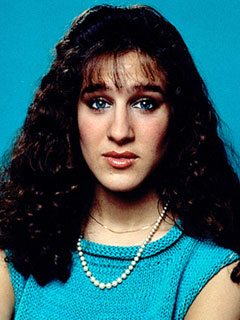 Candace Bushnell, the woman who launched a thousand well-heeled tourists on to a stoop in the Greenwich Village, is now jumping on the popular Young Adult bandwagon, having announced that she's inked a deal to write two teen novels. Get excited, they're Sex and the City prequels!

Titled The Carrie Diaries, they'll take readers "back to Carrie Bradshaw's formative years in high school, giving an inside look at Carrie's friendships, romances and how she realized her dream of becoming a writer." According to the undoubtedly accurate Wikipedia entry on the fictional character, she's been living in Manhattan since age 17, and upon her arrival she "wore Candie's and took the subway." Incroyable!

Michael Musto looks at the inevitable movie and/or television series these books will birth, and notes that "Bushnell has said she fancies the possibility of Miley Cyrus as Carrie." He includes his own casting, opining that Dakota Fanning would make a great Miranda.

That lady in blue to the left is the real Sarah Jessica Parker in her formative years, who would you cast?